Orthodox Jews Are Crowdfunding the Breeding of a Red Cow Because Religion August 11, 2015 Sarah Rasher

For millennia, Orthodox Jews have had no choice but to pray and wait for the perfect red heifer that will allow them to rebuild the Third Temple in Jerusalem.

But with the deadline for the Messianic Age approaching — Orthodox “scholars” say that we have about 200 years to usher it in, or it will never happen — the Temple Institute has brought prophecy fulfillment into the 21st century, using social media to raise funds to genetically engineer a sacred cow. 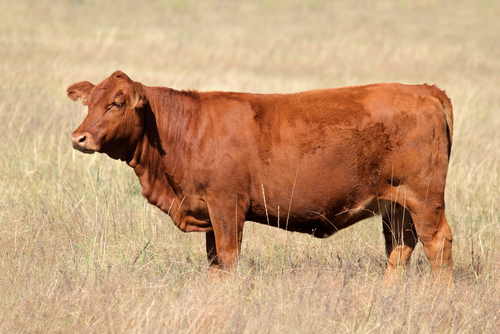 So far, nature has failed to provide a three-year-old red female cow that has never labored — an animal mentioned in the Torah and pondered by generations of livestock-obsessed rabbis. Most of those rabbis agree that the Third Temple will reappear on the Temple Mount as a miraculous event, but a few believe that humans have to build it themselves. Organizations like the Temple Institute believe that the Temple cannot be built without the sacrifice of an unblemished red cow.

Rabbi Chaim Richman, head of the Temple Institute’s international division, insisted: “Make no mistake, this project is nothing less than the first stage of the reintroduction of biblical purity into the world, the prerequisite of the building of the holy temple.

For 2,000 years we’ve been mourning for the destruction of the holy temple, but the future is in our hands.”

The problem is that they can’t find the Chosen One. Every few years, the Temple Institute announces that they’ve found a candidate, only to discover that it has too many non-red hairs or a job on its resume. Since nature has not provided, the organization has turned to science. They want to implant Red Angus embryos into Israeli cattle, improving the odds that a red heifer will be born in their own backyard.

But engineering a miracle cow is expensive. It takes more than embryo implantation and a comfortable barn. So they’re doing some fundraising. The Temple Institute’s Indiegogo page says that its $125,000 initial goal will also go toward

The publication of original, ground-breaking halachic research and findings

The Indiegogo campaign has only raised about $32,000 so far, which reinforces the notion that the Temple Institute is on the fringe of Orthodox belief. Even those who think the Third Temple can be constructed by human hands are wary of breaking Israeli law — Jews are not allowed on the Temple Mount, which is also sacred to Muslims. In addition, the Texas ranch that breeds Red Angus cows says that the Temple Institute did not fully inform them of its intentions, and so far their genetic engineering efforts have only produced male animals.

On the other hand, the Third Temple project can be seen as oddly noble, since the Temple Institute thinks it would unite humanity, bring God to earth, and begin an era of peace. More rational approaches to ending strife in the Middle East have failed. At this point, why not try a cow?

August 11, 2015
Indian Court Rules That Faith-Based Starvation in Jainism Is Suicide
Next Post