One of the problems with President Obama‘s Office of Faith-Based and Neighborhood Partnerships is that it helps the government give money to religious groups that do charity work (1) even if they proselytize along the way and (2) even if they discriminate against LGBT people in their hiring.

The latter issue is still a source of controversy, but there may finally be a fix for the former.

Last week, director Melissa Rogers (below) announced a proposed rule change affecting nine different federal agencies (out of the 14 that partner with her office). The new rule would prevent grant-receiving groups from preaching while using taxpayer funds: 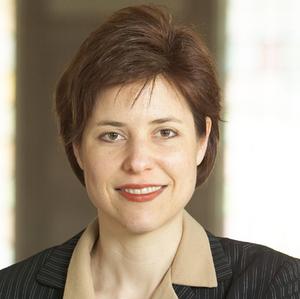 The proposed rules clarify the principle that organizations offering explicitly religious activities may not subsidize those activities with direct federal financial assistance and must separate such activities in time or location from programs supported with direct federal financial assistance. For example, if a faith-based provider offers a Bible study as well as a federally supported job training program, the Bible study must be privately funded and separated in time or location from the job training program.

The rules would also make clear to all groups that they cannot discriminate against beneficiaries on the basis of their faith, meaning that job training program could not have a “Christian-only” requirement.

All of that sounds pretty good on the surface. Americans United for Separation of Church and State applauded the proposal and said that, despite the anti-gay discrimination loophole, these proposed changes were still a step forward:

“These proposed regulations should go a long way toward ensuring that taxpayer-funded organizations abide by the Constitution,” said the Rev. Barry Lynn, executive director of Americans United, who advised the White House on the reforms. “By doing so, the regulations will ensure those who seek services won’t be kicked out of a homeless shelter or a drug treatment class because they don’t want to pray or listen to preaching.”

(AU will continue pushing for an end to the anti-LGBT religious discrimination.)

While American Atheists is pleased to see that 9 of the 14 federal agencies with a faith-based and neighborhood partnership office have issued proposed regulations to comply with President Obama’s 2012 Executive Order to ensure proselytizing and religious activities are separate from charitable purposes, we see no mechanisms to ensure compliance.

Finally, we will not give up the fight to ensure any qualified person may work for a religious charity rather than be refused employment because of their atheism.

Diana Jones Castillo, the Secular Coalition for America‘s Legislative Manager, shared a similar sentiment. While SCA approves the don’t-preach-with-taxpayer-money rule, Castillo said there’s much to be desired to “ensure that no federal money is used for religious purposes.”

The proposed rules are actually pretty extensive and you can read them in detail here. Even better, if there’s anything you don’t like, go ahead and leave a comment on that site. The White House is accepting public comments for the next two months, after which they’ll be (possibly) altered and finalized.

August 11, 2015
Christian Bigot Mat Staver: The Boy Scouts Are Now "a Playground for Pedophiles"
Next Post