Last year, we learned that a war memorial outside the Boone County courthouse in Missouri had finally covered up the Jesus Fish symbol that had been there for 20 years: 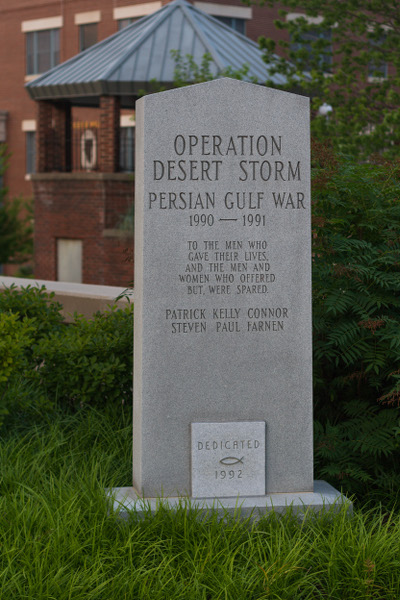 That was the crux of the issue: the people in Boone County just didn’t give a damn about any veterans who weren’t Christian. Or they wrongly assumed every veteran believed in the same God as them. Whether it was out of selfishness or ignorance, they had no business asking the government to promote Christianity on a monument. If they wanted the Jesus fish symbol, they could put it up in their homes or churches, or the government had to allow every non-Christian veteran the same opportunity.

For a while, it looked like government officials had finally come to their senses. Owners of a private cemetery had volunteered to take the Christian monument and put it up on their property, and the county was ready to give them the green light.

Until relatives of one of the veterans found out:

So there was even more discussion. It all came down to a vote this morning and — can you believe it? — the County commissioners did the right thing. They’ll replace the current memorial with one that doesn’t include the Christian symbol:

In a 45 page draft order, attorneys with the firm said keeping the memorial where it is with the “ichthys” or Christian fish symbol could “reasonably be construed by citizens who view the Memorial as being a governmental endorsement of the Christian faith, as opposed to other religious faiths or as opposed to those who have ‘no faith at all.'”

“The Memorial, in its current form, would be found by such court to violate the requirement of religious neutrality as imposed by federal courts,” the report says.

The report goes on to say “There is no historical basis for associating this Christian symbol with Operation Desert Storm or the Gulf War.”

There’s no disrespect to the veterans here at all. They will still be honored, but for their service, not their faith, which is exactly what the government should be doing.

It’s unclear what the County plans to do with the old monument.

“I’m sure everyone in this room is going to work very hard to make sure there’s a new commission,” Columbia resident Roger Fries told commissioners Tuesday morning. Fries was one of several people who spoke following the commission’s unanimous decision to relocate the memorial and to adopt a policy guiding future placement of memorials on county government property.

Reed Hickam, senior ride captain for the Patriot Guard Riders, told commissioners that he was “okay with” the decision to relocate the memorial if there was a replacement memorial, but he still disagreed that the ichthus symbol became an issue in the first place.

“It will never be forgotten,” Hickam said. “Come election time, I guarantee that.”

If your vote hinges entirely on whether the local government will advertise your religion for you, consider yourself lucky for not having any real problems.

***Update***: According to one source (via email), the old monument will be moved to the Columbia Cemetery, while the new one will be commissioned at the cost of the taxpayers.

(Image via Mark Schierbecker. Thanks to @Visloch for the link. Large portions of this article were published earlier)

August 11, 2015
Orthodox Jews Are Crowdfunding the Breeding of a Red Cow Because Religion
Next Post