To Show She’s Still Pure, a Rape Survivor in India Will Have to Balance a Large Rock on Her Head August 10, 2015 Hemant Mehta

To Show She’s Still Pure, a Rape Survivor in India Will Have to Balance a Large Rock on Her Head

A rape victim in India — who was denied an abortion by the government — will now have to prove her purity if she wants to get back together with her husband. And the test involves balancing an 88-pound stone on her head. 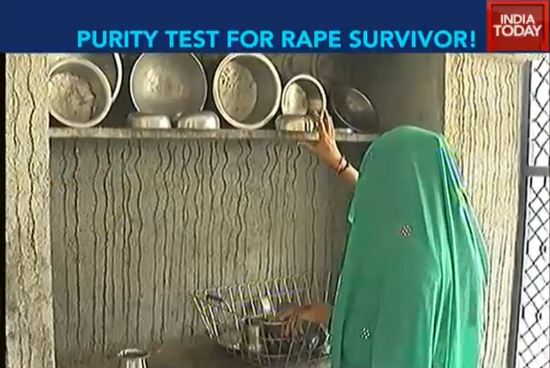 That report, which I’m unable to verify (so take it with a giant grain of salt), comes from India Today.

The test, which is known as “agnipariksha” (meaning “test of fire”), is a cultural tradition in some of India’s remote rural areas that requires women whose virtue has supposedly been tainted by sexual abuse or whose chastity has been questioned to complete this unusual and physically challenging stunt. It’s unclear precisely how long she would have to keep the stone atop her cranium; her observers would await some sort of spiritual signal to show that she had passed.

So it’s a ridiculous test that ultimately proves nothing — a mixture of superstition, misogyny, and shitty public policy. This is how some rape victims are treated in India, and the government, including Prime Minister Narendra Modi, is doing next to nothing to improve the situation.

Even if this particular story turns out to be a hoax, the fact that it’s plausible tells you how bad the situation is for women in certain parts of the country. During the first two months of this year alone, there were more than 300 rapes reported in New Delhi. (How many went unreported? It hurts to even think about.)

Even if this unnamed woman passed the rock-on-head test, you get the feeling that a lot of people around her would still not consider her “pure.” It’s just an awful situation all around, and she has little power to change it.