Donald Trump was supposed to be speaking this weekend at the conservative RedState Gathering in Atlanta, but he was disinvited late last night. 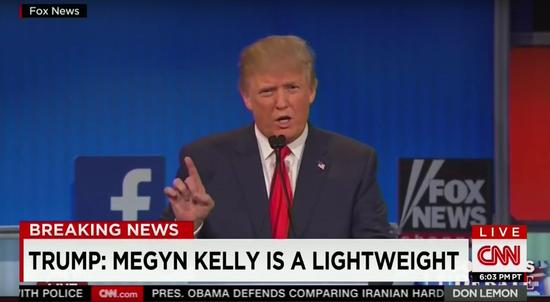 The reason? He told CNN that he was unhappy with moderator Megyn Kelly‘s questions at the GOP Primary Debate, blaming them on her period:

… while Mr. Trump resonates with a lot of people with his bluntness, including me to a degree, there are just real lines of decency a person running for President should not cross.

His comment was inappropriate. It is unfortunate to have to disinvite him. But I just don’t want someone on stage who gets a hostile question from a lady and his first inclination is to imply it was hormonal. It just was wrong.

I have invited Megyn Kelly to attend in Donald Trump’s place tomorrow night.

As much as I agree with the decision, it makes no sense that this was the bridge too far for a Republican to cross.

Trump has called women “fat pigs,” “dogs,” and “slobs.” That was all okay for Erickson.

We know he said to a contestant on Celebrity Apprentice that she “would be a pretty picture to see her on her knees.” That was fine for Erickson.

Hell, most of the Republican slate wants to defund Planned Parenthood, making it that much more difficult for women to obtain healthcare (in addition to legal abortions), with Jeb Bush adding “I’m not sure we need a half-billion dollars for women’s health issues,” and Erickson is in full support of it.

There are so many more examples of how the GOP’s positions have made life worse for women.

But an indirect reference to a woman’s period, which Trump’s people deny he even meant? That’s the step too far?!

Keep in mind that Erickson himself has referred to Michelle Obama as a “marxist harpy wife” and women who opposed an anti-abortion ad as “feminazis” who are “too ugly to get a date.”

Erickson should disinvite himself from the event. Unless he thinks sexist remarks are perfectly fine as long you’re not running for President.

What’s next? Bryan Fischer asking the GOP to take the homophobia down a notch?

Don’t spend too much time thinking about it. If conservatives weren’t allowed to be hypocrites, there wouldn’t be any of them left.

August 8, 2015
Bryan Fischer: Attending a Gay Wedding is Like Going to the Opening of a Crack House
Next Post