“Senator Cruz, start from you. Any word from God?”

It was late in the night as debate moderator Megyn Kelly asked the question, her face beginning to crack from a marathon effort at hiding her own disgust with the performances on the stage up to that point. The whole affair had been more akin to absurdist performance art than political discourse, at turns laughable but mostly terrifying. Even Kelly, known for her acerbic tongue, was struggling not to cringe. 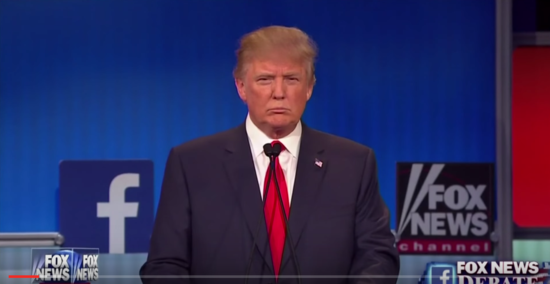 The evening had started out in predictable fashion. The JV GOP debate, featuring mainstream candidates whose polling numbers just barely cut them out of the main event, held few surprises. Much of the commentary from the candidates echoed their talking points over the past six months and toed the party line. They were all about the base, spouting social conservatism and inappropriately re-appropriated populist rhetoric. All of them discussed Donald Trump as the problem child of the party, and all of them spoke checks their records can’t cash. In other words, it was par for the course.

There were, of course, memorable takeaways. Rick Perry still can’t pronounce “nuclear” and thinks Reagan was so raven. Jim Gilmore, who most people couldn’t pick out of a crowd, played the role of crazy ranting uncle who might have had a few too many drinks before the family dinner. Bobby Jindal touted a record divorced from the reality of his tenure in Louisiana before insisting immigrants assimilate or be treated as invaders. Rick Santorum wants us all to know that Roe v. Wade is the new Dred Scott. Lindsey Graham told women to stop whining because at least America isn’t Iraq and spoke of the need to surveil mosques. Carly Fiorina, perhaps the biggest winner of the first round, almost made us forget that she ran Hewlett-Packard into the ground while name-dropping like her life depended on it. George Pataki, with a perfectly forgettable performance, may have been the biggest loser.

The JV stage lulled us all into a false sense of security. As we waited for the main event to kick off, jokes flew about Trump and the rest of the lineup. Think of the gaffes! Think of the memes! We thought it would a trainwreck of epic proportions, to be sure, but a hilarious one.

We were so wrong. It was like walking into a movie theater expecting to see the latest Tina Fey film and being confronted by a Rob Zombie horror flick instead. We knew the GOP had gone off the rails, but the Varsity debate last night was an exclamation mark of nightmare proportions.

It started early. Kelly put Trump on the spot, pointing out a long and tawdry track record when it came to women. As she recounted some of the descriptors he’d used — fat pigs, dogs, slobs, disgusting animals — Trump joked that he was talking about Rosie O’Donnell and the room burst into applause. When she pointed out that he’d once told a Celebrity Apprentice contestant that she’d look pretty on her knees, he shrugged off the criticism and complained about political correctness gone mad. It brought the house down.

Take a moment to let that sink in. The man at the top of the polls for the GOP argued there’s nothing wrong with reducing women to their looks. We’re talking about a party that wants to elect a man who thinks it’s okay to treat half the population like objects. They literally cheered him for asserting as much.

I won’t lie. I had to pause the debate after that. It was one of the most deeply unsettling things I’ve watched on television.

It didn’t stop there, though. Mike Huckabee referred to transgender members of the armed forces as elements in a poorly conceived social experiment, stating that the purpose of the military was to “kill people and break things” (as if transgender soldiers couldn’t do what was needed of them in the military). Ben Carson, ignoring mountains of data and the lived experiences of millions of people of color in America, implied that racism isn’t a thing anymore and defended the use of torture in war. His plan for the tax code? Biblical tithing. Scott Walker doubled down on his position that abortion should be illegal in all cases — even when the life of the mother is in danger, which he doesn’t believe actually happens in this day and age. Marco Rubio insisted that curriculum should be dictated by parents, not education professionals (or, you know, reality).

The bulk of the night was an elaborate display of tomfoolery. Chris Christie and Rand Paul got into an actual shouting match over the NSA and hugging. The debunked Planned Parenthood videos were trotted out as base bait at every possible opportunity. There was an extended exchange about Trump buying candidates, including donating to Hillary Clinton in exchange for her attending one of his many weddings. Really, anytime Trump spoke, things devolved into a mess of nonsensical babble. You’d catch yourself wanting to laugh before remembering that one of these idiots could actually end up in the White House.

There were brief glimpses of sanity. Rubio eloquently defended the need for comprehensive immigration reform. Bush was solid on education. Kasich, blowing everyone away, was the voice of reason on the stage throughout the night. His answer on same-sex marriage, if imperfect, was particularly poignant in contrast to the rhetoric of his peers, and earned him a well deserved roar of applause from the crowd.

But, by and large, the entire affair was a nauseating display of ignorance, hubris, and dangerous, delusional thinking, topped off by Kelly’s all too serious question about messages from God. Ted Cruz said he hears from Him daily. Kasich said God wants America to be strong. Rubio cast the GOP as God’s chosen party.

If the angels were real, they’d be weeping.