No, That’s Not a Demon in Front of President Obama August 5, 2015 Hemant Mehta

No, That’s Not a Demon in Front of President Obama

Betteridge’s law of headlines says: “Any headline that ends in a question mark can be answered by the word no.”

So you know the proper response for when Christian website WND.com asks, “Is this a ‘demon’ racing in front of Obama?” 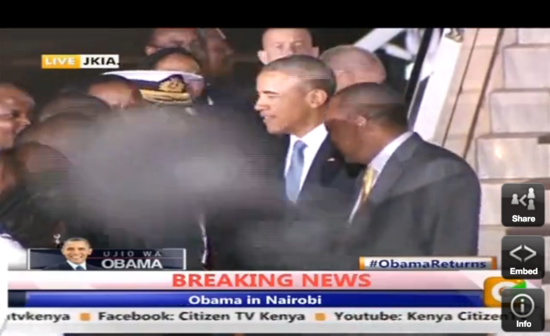 Then again, it’s WND.com. You don’t need a question mark to dismiss what the site says.

Even writer Joe Kovacs knows how ridiculous this is:

Of course, there’s a variety of possible explanations for the mystery, including a camera flash, a reflection, an out-of-focus person, a boom microphone, a bird, an insect, a glitch in the video or the always popular optical illusion.

A video editor who examined the footage told WND: “From a video editor’s standpoint, it could just be some sort of glitch. However, there doesn’t seem to be any logical reason as to why this glitch would appear as the rest of the video seems to be functioning fine. The image does look like some type of other-worldly being, but I’m sure everyone’s own imagination will conjure up what they would like it to be.”

That’s textbook #ChristianLogic for you, isn’t it? We don’t know exactly what it is… so let’s just assume it’s the supernatural. And since it’s Obama, let’s assume it’s evil.

You know if we were talking about Mike Huckabee instead, they’d call the blur a sign from God.

August 5, 2015
At Business Conference, Speaker Says "If You're an Atheist, You're Stupid" as Camera Rolls
Next Post