At the moment, there are no openly non-theistic members of Congress. There was Rep. Pete Stark up until 2012… and nobody since. But that could change come 2016.

Earlier this year, Sen. Barbara Mikulski (D-MD) announced that she would be retiring after nearly three decades in the Senate. Rep. Chris Van Hollen (D-MD) then announced that he would be running for Mikulski’s seat, freeing up his own position in Congress.

It’s that seat that Maryland State Senator Jamie Raskin (below) is now vying for. 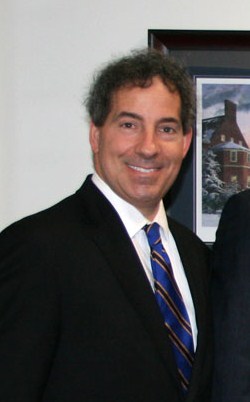 He’s not the first person to have said a variation of that line, but he’s clearly someone who supports church/state separation.

Rasking also accepted an award in 2008 from the American Humanist Association and joked in his acceptance speech about how he had the choice of declining the honor:

Raskin has been in the State Senate since 2006 and was selected as majority whip in 2012. He has the experience that recent atheist candidates for public office have lacked and a very real shot at winning the seat. More importantly, while he doesn’t hide the fact that he’s not religious, he also doesn’t flaunt it in a way that might alienate religious voters. It’s a non-issue for him — which is exactly how it should be. (The more interesting question will be whether his opponent(s) will try to use his Humanism against him.)

Today, Raskin is officially receiving the support of the Freethought Equality Fund PAC:

And I’m happy to see that Raskin is welcoming the endorsement:

It’s worth noting that, if Raskin wins, he would be the first openly non-religious candidate to win a new seat in Congress. (Pete Stark’s admission came long after he first entered political office; he won two re-elections after coming out as a non-theist.)

You can donate to the Freethought Equality Fund PAC right here. If you’d prefer donating to Raskin’s campaign directly, you can do that as well.

(Image via Wikipedia. Large portions of this article were publisher earlier)

August 5, 2015
Catholic Mother, Despairing Over Her Gay Son, Gets Dose of Reality After Seeking Advice in Online Forum
Next Post