On last night’s next-to-next-to-last episode of The Daily Show (Edit: The Jon Stewart-hosted version, I mean), Jessica Williams took a look back at some previous guests to make clear that, yes, they were really willing to talk to the show, and, no, the show did not take them out of context (as some have speculated).

To prove that point, she re-visited Harlem Hate Pastor James David Manning, the man who (among other things) said Starbucks lattes contain the “semen of sodomites”: 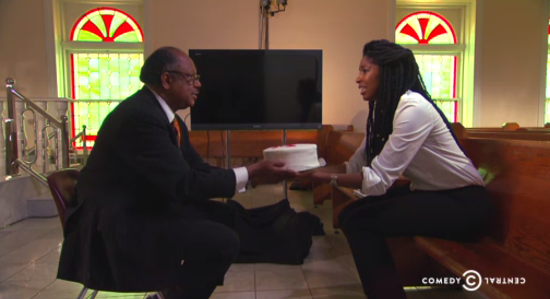 As expected, Manning pointed out his crazy words weren’t taken out of context. He really is just that crazy. He reiterated that he now thinks President Obama is the “son of Satan.”

Much better, don’t you think?

August 5, 2015 Sen. Bernie Sanders Will Speak at Liberty University Next Month Because Why the Hell Not
Browse Our Archives
What Are Your Thoughts?leave a comment