I’m vegetarian. It’s not something I spend much time defending or arguing about, but there you go. I also get why people eat meat, with reasons ranging from all the supposed health benefits to “But it’s delicious.” They’re not convincing enough for me, but I understand them.

Hunting animals for sport, though? I don’t get that at all.

You’re not catching a meal. You don’t need to do it for survival. You’re just killing for the sake of killing. How twisted does your mind have to be to find that fun?

While much of the recent media attention has been on Dr. Walter Palmer (who paid money to kill Cecil the Lion), it’s rapidly shifting to Sabrina Corgatelli, an Idaho hunter who gleefully took to social media to show off her latest kills, including a giraffe: 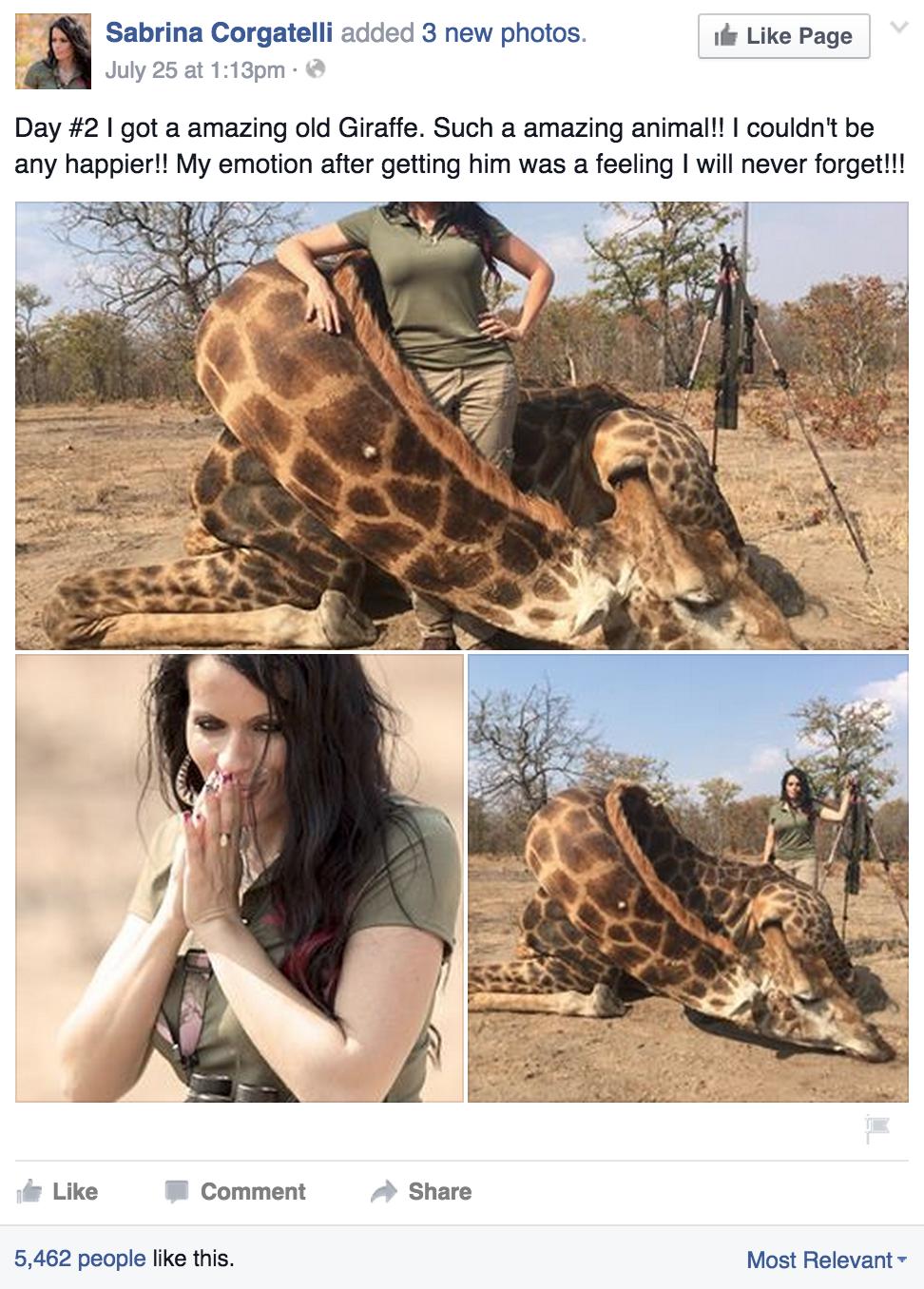 Why another creature has to die so she can take a selfie is beyond me.

After posting a picture of another one of her “prizes,” Corgatelli defended (or explained) her actions using the Ken Ham Playbook, going straight to the Book of Genesis:

Genesis 9:3 says, “Every moving thing that lives shall be food for you. And as I gave you the green plants, I give you everything.”

Genesis 27:3 says, “Now then, take your weapons, your quiver and your bow, and go out to the field and hunt game for me.”

Quoting the Bible, of course, is hardly a defense of anything. Hell, even those two verses make no sense. It’s not like she ate the giraffe (Genesis 9:3) or went after it with a bow and arrow (Genesis 27:3). Just because she can cherry pick a couple of verses doesn’t justify her actions. We could always turn this around and say Corgatelli destroyed some of God’s creations. And if context is irrelevant, Romans 14:21 says “It is better not to eat meat or drink wine or to do anything else that will cause your brother or sister to fall.” Checkmate, Christians.

Corgatelli defended herself without the Bible during a news interview:

“When you hunt an animal, there is … everybody just thinks we’re cold-hearted killers, and it’s not that,” she said. “There is a connection with the animal and just because we hunt them doesn’t mean we don’t have a respect for them.

“But giraffes are very dangerous animals. They could hurt you seriously, very quickly.”

The only way that makes sense is if an Evil Giraffe was about to attack her out of nowhere. Which it wasn’t.

And, again, it’s hard to make sense of the argument that she respects these animals so much that she wants them dead.