Bonifay, Florida is another city where the local police chief has put “In God We Trust” stickers on all the department’s vehicles for reasons that *totally* have nothing to do with Jesus. (All hail Jesus.)

It’s a decision that led to dueling protests over the weekend: 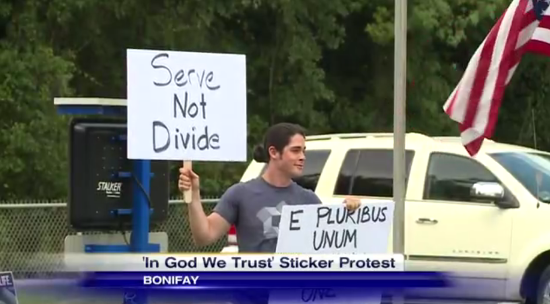 … the move prompted Wesley Wilson and others from Bay, Washington, and Holmes counties to take a stand against the stickers, emphasizing what they say is important about the separation of church and state.

“Everyone’s going to have different beliefs,” said Wilson. “We don’t think it’s right for the government to try to force any beliefs on anyone. We think people should be able to believe or not believe as they please. And putting ‘In God We Trust’ on the back of the police cars, that says something about us.”

We need more people speaking out against this backdoor approach to sneaking God into government. Police Chief Chris Wells said the response has been overwhelmingly positive, as if popular opinion is the deciding factor here, but he’s not hearing from enough people who see it as a problem. (Let me make that easier: You can contact him directly here.)

In the meantime, the phrase is just spreading:

August 3, 2015 College Football Analyst Sues Fox Sports, Saying He Was Fired Because of His Christian Beliefs
Browse Our Archives
What Are Your Thoughts?leave a comment