As you may have heard by now, an ultra-Orthodox Jew went on a stabbing rampage yesterday during a gay pride parade in Jerusalem, injuring six people (two seriously). His ultra-Orthodox community is one that is known for its “hostility towards homosexuals.” 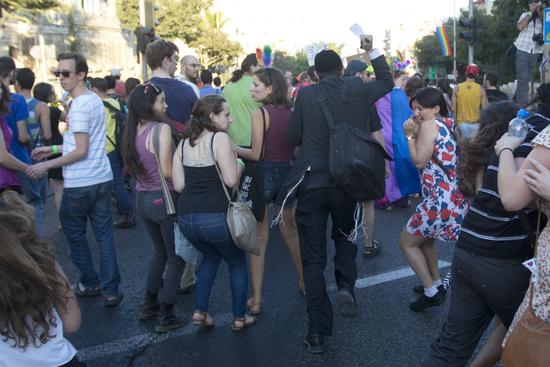 As if Yishai Schlissel‘s crime wasn’t bad enough, it turns out he did the same thing a decade ago:

A police spokesperson identified the suspect as the same man who stabbed three people at the parade in 2005.

Yishai Schlissel, an ultra-Orthodox Jew, was sentenced to 12 years in prison for that attack and was released from prison three weeks ago.

The question we ought to be asking is how much responsibility falls on his community for pushing the sort of anti-gay rhetoric that led one of its members to commit such a disturbing act. That’s not to say his community deserves any legal repercussions for something he did. For the most part, people have the right to say and think whatever they want. It’s not like anyone else in the community was trying to kill LGBT people and straight allies.

But you would hope community leaders have the ability to step back and think about whether a different approach to homosexuality on their end might have prevented this. (Another picture that was taken at the parade shows a man under a sign reading “Holyland Not Homoland!!!”)

I don’t have confidence they’ll do that. Faith-based hate is especially rigid.

In Israel, everyone, including the LGBT community, has the right to live in peace, and we will defend that right. pic.twitter.com/H2fex3edfC