Was it because they got a warning letter from a church/state separation group, or because a Satanist wanted to be included in the invocation rotation? Nope! It’s because a Christian pastor decided to use his time to give a sermon on homosexuality and abortion… to people who live a stone’s throw from San Francisco. 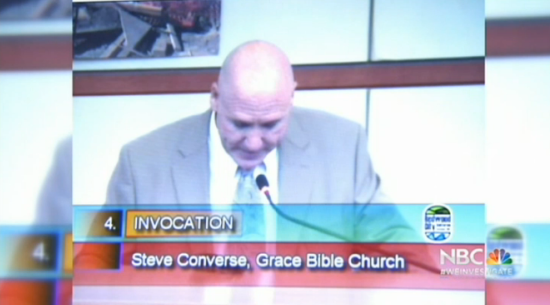 This is a bit of what Pastor Stephen Converse of Grace Bible Church said during his invocation earlier this week:

We pray for our country and its leaders who have clearly turned from your ways, O God. We live in a society where the murder of human life in the womb has become commonplace…

… But we live in a country where the Supreme Court, this human court, has said that murder is not murder, marriage is not marriage, and family is not family.

To his credit, Mayor Jeff Gee publicly condemned the remarks saying they didn’t reflect the council’s views. And now invocations are suspended until the council can figure out how to prevent this from happening again.

I can help them out: Just get rid of the invocations altogether.

It’s perfectly legal and avoids a whole host of additional potential problems. A city council meeting should draw attention because of the policies being discussed and adopted, not because a preacher assumed the local government was just an extension of his church.

What else would you expect when you let a bull run loose in the china shop? Bigots gonna bigot.

(Thanks to @csAdAstra for the link)

July 31, 2015 A Public Dialogue on the Topic of "Islamophobia"
Browse Our Archives
What Are Your Thoughts?leave a comment