In a now-deleted Facebook post, the owner of JJ’s Sporting Goods in Saint Johnsville, New York said he would no longer sell weapons to Muslims: 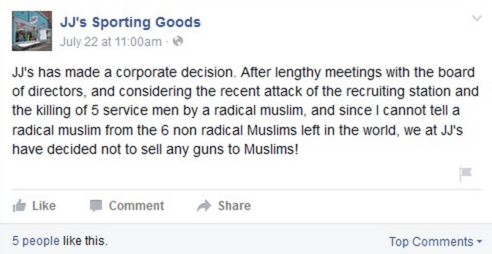 “JJ’s has made a corporate decision. After lengthy meetings with the board of directors, and considering the recent attack of the recruiting station and the killing of 5 service men by a radical muslim, and since I cannot tell a radical muslim from the 6 non radical Muslims left in the world, we at JJ’s have decided not to sell any guns to Muslims.“

I’m tempted to point out that there are — wait for it — more than 6 non-radical Muslims in the world.

I’m also tempted to point out that religious discrimination is illegal in New York.

But first, I’d really like to know how owner John Swartz plans to identify Muslims who walk into his store. I know this may come as a shock to him, but they don’t all look like the stereotypical terrorists you see in movies.

Am I allowed to buy a weapon? I’m not a Muslim, but I’m brown… DID I JUST BLOW HIS MIND?!

WKTV reporter Joleen Ferris interviewed Swartz and his answers were as appalling as you’d expect:

… There should be some kind of a responsibility, a personal or moral responsibility on my part, that if I see someone, as I talk to them — as you see, I engage people in conversations — and if I determine that these people exhibit behaviors contrary to average people, then I feel it’s incumbent that I do not allow them to purchase a weapon.

… I can’t tell if [a Muslim is] a good one or a bad one. And sometimes I can’t tell if they are one, so they’ll slip through the cracks. But I would do the same for the people who exhibit mental health issues…

There you have it. The determining factor to identify Muslims? They’re not acting like “average people.”

Swartz said in the interview that there was no negative reaction to his post, though a screenshot of his post on the news station’s website shows a single comment with a thumbs up icon draped in the Confederate Flag. Which I guess he finds just awesome.

And then, to reiterate how not-racist he is, Swartz said he would have no problem selling a weapon to a Muslim police officer, because he’d assume that person has already gone through a background check. See? Totally not racist.

Now that his Facebook post has been taken down, it’s unclear what he plans to do. Maybe Muslims in the area should go to his store, Qur’an in hand, and see what happens. It’s a lawsuit waiting to happen if he refuses service.