Camille Paglia, dissident feminist and social critic, has finally driven a stake into the heart of her relevancy, and I’m not just saying that because I disagree with her.

In her latest interview on Salon, I find plenty of points we agree on… only to see, a few syllables away, a statement that is an utter betrayal of what I expect from a thinking person. She has achieved a perfect blend of a Libertarian version of Ann Coulter, boldly disagreeing for disagreement’s sake, with a twist of Stuart Smalley, had he been an egomaniac: “I’m good enough, I’m smart enough, and doggone-it, I like myself so much I don’t care if other people like me. Oh, and I was an atheist before it was cool.” 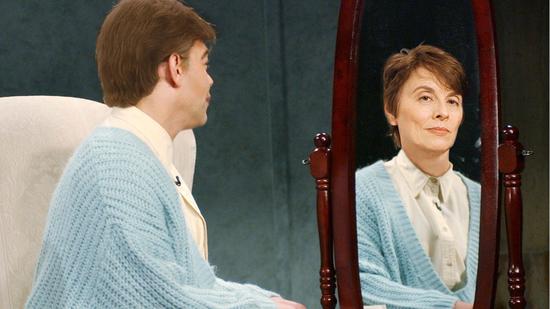 [Salon‘s David Daley]: You’re an atheist, and yet I don’t ever see you sneer at religion in the way that the very aggressive atheist class right now often will. What do you make of Richard Dawkins, Sam Harris, Christopher Hitchens and the religion critics who seem not to have respect for religions for faith?

Paglia: I regard them as adolescents. I say in the introduction to my last book, “Glittering Images”, that “Sneering at religion is juvenile, symptomatic of a stunted imagination.” It exposes a state of perpetual adolescence that has something to do with their parents — they’re still sneering at dad in some way. Richard Dawkins was the only high-profile atheist out there when I began publicly saying “I am an atheist,” on my book tours in the early 1990s. I started the fad for it in the U.S, because all of a sudden people, including leftist journalists, started coming out of the closet to publicly claim their atheist identities, which they weren’t bold enough to do before. But the point is that I felt it was perfectly legitimate for me to do that because of my great respect for religion in general — from the iconography to the sacred architecture and so forth. I was arguing that religion should be put at the center of any kind of multicultural curriculum.

It seems the only aim Paglia has left is to hear herself talk. She’s spouting straw man constructs of atheists that are so faulty she could undoubtedly dispute them herself. Is the sneering warranted? To the contrary, I’d say one who claims to be an atheist and still holds a “great respect for religion” is juvenile. She insists her appreciation of the iconography and architecture is at the root of this respect, which is like a child holding his father in a state of idolatry for all that he provides and his seemingly endless wisdom, despite his father abusing his sister, possession a large dose of narcissism, compulsively lying, and refusing to accept responsibly for his actions.

It would be juvenile to brush that damage under the rug. An adult would hold him accountable, sever ties, and channel the energy into a campaign to prevent future harm.

I’m speaking here as an atheist. I don’t believe there is a God, but I respect every religion deeply. All the great world religions contain a complex system of beliefs regarding the nature of the universe and human life that is far more profound than anything that liberalism has produced.

Very complex, ranging from “God did it” to “the world is flat and on a turtle’s back.”

Silly atheists, with their quantum mechanics and evolutionary biology…

The real problem is a lack of knowledge of religion as well as a lack of respect for religion. I find it completely hypocritical for people in academe or the media to demand understanding of Muslim beliefs and yet be so derisive and dismissive of the devout Christian beliefs of Southern conservatives.

All three atheists mentioned above — Dawkins, Harris, Hitchens — have been highly critical of Islam in addition to the sort of Christianity practiced by conservatives. They’re equal-opportunity debunkers.

But yes, the sneering is ridiculous! Exactly what are these people offering in place of religion?

In my system, I offer art — and the whole history of spiritual commentary on the universe. There’s a tremendous body of nondenominational insight into human life that used to be called cosmic consciousness. It has to be remembered that my generation in college during the 1960s was suffused with Buddhism, which came from the 1950s beatniks. Hinduism was in the air from every direction — you had the Beatles and the Maharishi Mahesh Yogi, Ravi Shankar at Monterey, and there were sitars everywhere in rock music. So I really thought we were entering this great period of religious syncretism, where the religions of the world were going to merge. But all of a sudden, it disappeared! The Asian religions vanished — and I really feel sorry for young people growing up in this very shallow environment where they’re peppered with images from mass media at a particularly debased stage.

You’ve got to wonder if Paglia, self proclaimed atheist, has ever met another atheist.

Among my atheist friends, we tend to value a wide variety of visual art, music, comedic performances, and culture. We value life. We constantly question consciousness and how our reality ties in to the biggest thing we can yet measure, a 14-billion-year stretch of the cosmos. The grandeur of reality is a sort of spirituality on its own.

Paglia’s lament amounts to little more than your grandpa saying, “Why, back in my day…”

You want to know why all those religions didn’t merge into a peaceful conglomerate? Blame religion. Having nothing to do with its critics, religion as a whole is self-devouring. Doctrines conflict and compete over land, followers, and power.

But this sneering thing! I despise snark. Snark is a disease that started with David Letterman and jumped to Jon Stewart and has proliferated since. I think it’s horrible for young people! And this kind of snark atheism — let’s just invent that term right now — is stupid, and people who act like that are stupid. Christopher Hitchens’ book “God is Not Great” was a travesty. He sold that book on the basis of the brilliant chapter titles. If he had actually done the research and the work, where each chapter had the substance of those wonderful chapter titles, then that would have been a permanent book. Instead, he sold the book and then didn’t write one — he talked it. It was an appalling performance, demonstrating that that man was an absolute fraud to be talking about religion. He appears to have done very little scholarly study. Hitchens didn’t even know Judeo-Christianity well, much less the other world religions. He had that glib Oxbridge debater style in person, but you’re remembered by your written work, and Hitchens’ written work was weak and won’t last.

Snark is essentially Camille Paglia’s attitude minus the humorous twist. She’s outright rude without redeeming qualities. And that’s supposed to be better?

In slight defense of Hitchens, he claimed his publisher pushed for the sensationalist subtitle for God is Not Great: How Religion Poisons Everything. In any case, Hitchens enjoyed a fruitful career as an award-winning author and journalist for 35 years prior to turning his focus to atheism. To dismiss everything the man has written seems irrationally cruel. (His book, incidentally, was the only one written by the “New Atheists” to hit #1 on the New York Times bestsellers list.)

Paglia finished her atheist condemnation by saying Richard Dawkins is on “some sort of personal vendetta” against religion. Well… of course he is. Science communicators are typically shoo-ins for that role. When you’re in a profession dealing with facts, and biblical literalists are constantly contradicting you, it’s no surprise that religion will become a prominent topic of discussion. It must be unfathomably frustrating to devote your life to evolutionary biology, become a literal expert in the field, teach at a university, and write best-selling books about the subject, only to face a constant barrage of, “Nuh-uh. Genesis 1:1.”

And once the floodgates have opened, you can bet atheists like Dawkins are going to speak out against other problems with religion, like sexual abuse, massacres, mental anguish, homophobia, slavery, greed, the stunting of progress in the sciences, and all other dark shadows faith has cast upon civilization. Being furious is within reason.

In another part of this interview, Paglia continued to demonstrate her lack of awareness by criticizing the liberal media for not reporting on Planned Parenthood for selling fetal parts. (I guess she hasn’t heard yet that that’s not a real thing.) Her own words are that it’s an “obligation, whatever your political views, to look at both liberal and conservative news sources every single day. You need a full range of viewpoints…”

Besides the false dichotomy of there only being two sides, I somewhat agree. However, she seems to be working off of the assumption that all news outlets, regardless of political bent, are reporting facts. Anyone who has paid attention to the stories coming out of both sides of the spectrum knows that’s not the case. (Jon Stewart, if anything, has built his reputation on his ability to call out the lies of the Right, though they’re not his only target.) The Planned Parenthood story, to name just one example, was constructed as propaganda. Numerous reports on the accuracy of the story have found the criticisms of the group unwarranted.

The concept of listening to all news sources for information can be overwhelming. And if you leave your head wide open, a lot of junk is going to fall in. Perhaps this summarizes the downfall of Camille Paglia.

If there’s anything I can appreciate about her, it’s that she refuses to be put in a box. But in the same vein, this lack of consistency is why she has no relevance today as anything other than a source of amusement.

July 31, 2015 New York Store Owner Says He Won't Sell Guns to Muslims... Somehow
Browse Our Archives
What Are Your Thoughts?leave a comment