Survey Says the U.S. Isn’t a Christian Nation… but I’m Not Sure What They Think We Are July 30, 2015 Hemant Mehta

Survey Says the U.S. Isn’t a Christian Nation… but I’m Not Sure What They Think We Are

A new survey published by LifeWay Research shows that most Americans don’t believe this is a “Christian nation.” 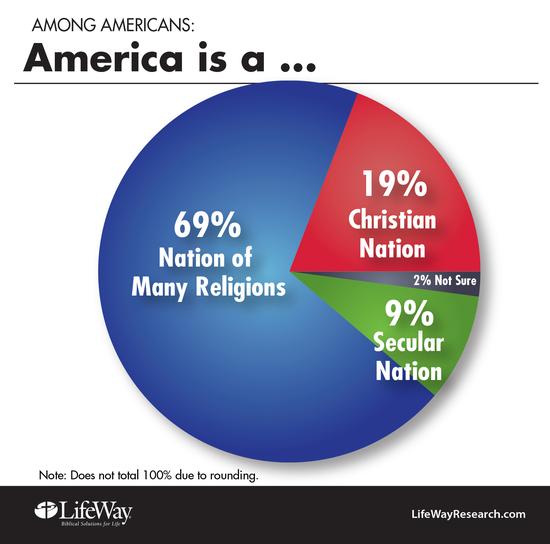 69% of respondents said this was a nation of “many religions.” I assume that just means they think we’re really diverse, but does that phrase include atheists? Honestly, even I’m not sure if I’m supposed to agree or disagree with that statement.

9% said it was a “secular nation,” which I guess means we’re not a theocracy. Or maybe it was a slam from Christians who think they’re being persecuted?

Oh, screw it, none of those options make much sense to me and I’ve read the article multiple times.

Things got a little more clear when respondents were asked whether America was a welcome place for certain groups. While participants felt Christians and Jews were overwhelmingly accepted, the numbers fell precipitously for atheists and Muslims: 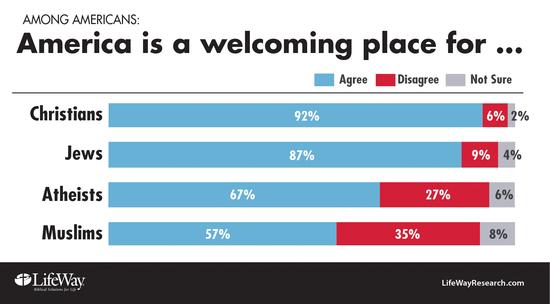 The numbers also change quite a bit depending on who you’re asking:

Most people of faith also believe atheists are welcome in America, but the nonreligious themselves are less likely to agree. Two-thirds (67 percent) of Christians and 78 percent of those in other religions say America is a welcoming place for atheists, but that view is shared by only 62 percent of the nonreligious.

Younger Americans are the age group most likely to see America as a welcoming place for both Muslims and atheists. Among 18- to 24-year-olds, 64 percent say America welcomes Muslims, and 79 percent say the same for atheists. Regarding Christians and Jews, however, young adults are not significantly more likely than the rest of the population to view America as a welcoming place.

Many atheists will be quick to tell you that being “welcome” and being “accepted” are very different. How welcome can we really be when we’re still completely unrepresented in national politics?

And, of course, there’s a big difference between asking people if they believe atheists are welcome in America and asking atheists if they feel welcome, a point that was echoed by Ibrahim Hooper, spokesperson for the Council on American-Islamic Relations.

So congratulations, fellow atheists! It sounds like people tolerate us.

Or at least they think other people do.

July 30, 2015
The Daily Show Explores (Non-Existent) Discrimination Against Christians in Arkansas
Next Post

July 30, 2015 Atheists Ask Judge Not to Dismiss Lawsuit Involving Banned (and Completely Inoffensive) Bus Ad
Browse Our Archives
What Are Your Thoughts?leave a comment