Another Snake-Handling Christian Dies After Snakebite (and Refusing Medical Help)

In February of 2014, Pastor Jamie Coots of the snake-handling “Full Gospel Tabernacle in Jesus Name” church in Middlesboro, Kentucky (and one of the stars of the show “Snake Salvation“) died from a snakebite. It’s possible he was merely injured from the snakebite and what tipped him over the edge was a million people saying “I told you so.”

And now it’s happened again with another Kentucky-based snake-handling church-goer: 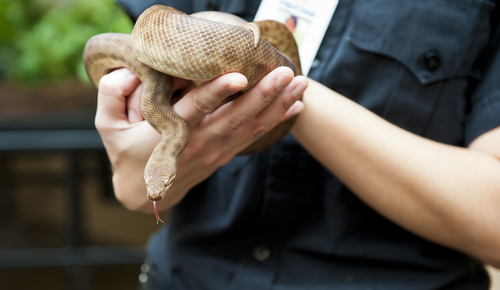 A man died after being bitten by a snake he had been handling during a church service in Bell County on Sunday.

John David Brock, 60, of Stoney Fork, was bitten on the left arm while handling the snake at Mossy Simpson Pentecostal Church in Jenson, according to the state police.

Brock refused medical treatment and went to his brother’s home, where he died.

If all the Christians who died from snakebites in the past weren’t a sign, and the medical personnel who God supposedly equipped with the abilities to extend life were ignored, what other signs did Brock want?

No word yet on how the snake is holding up.

July 29, 2015
Right-Wing Writer Wants Boy Scouts to "Shut the Whole Thing Down" Rather Than Allow Gay Leaders
Next Post