After Preacher’s Pro-LGBT Sermon Goes Viral, Church Does Damage Control So No One Thinks They Support Gay Rights

Last week, I posted a speech by Pastor Dewey Smith about the hypocrisy of those in the Christian church who condemn homosexuality while ignoring their own “sins.” I thought it was a pretty refreshing speech, even if Smith made clear that homosexuality was still a sin. 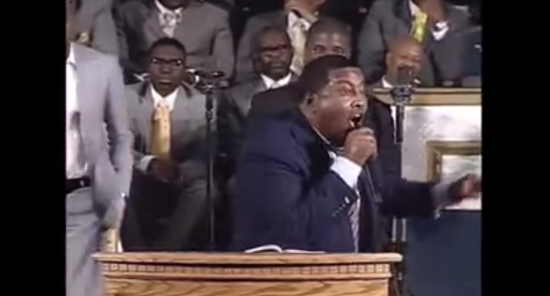 Now, his church — The House of Hope Atlanta (Greater Travelers Rest) in Decatur, Georgia — would like everyone to know that Smith and everyone else there still believe gay people shouldn’t have equal rights:

In response to concerns that Dewey’s comments in the clip might be signaling some advocacy for the gay community, Dewey’s church released a response shared in an email with The Christian Post on Monday.

“That clip was posted without our knowledge by someone who was in attendance and gives absolutely no context concerning the overall message. Since that time enumerable media outlets have posted the clip with captions best suited for their journalistic and editorial priorities. It’s important to know that the descriptions of the posted sermon clip are not the opinions of E. Dewey Smith Jr.,” noted the statement from Tigia Finn, executive assistant to Smith.

“By no means is Smith now, nor has he ever been a proponent of same-sex marriage. Smith has always believed and taught that marriage is only designed for a man and a woman. This reality was clearly stated during the sermon but not included for some reason by the person who posted the clip. Smith believes that same-sex marriage isn’t the Will of God,” the statement continued.

I’m not sure who said Smith was advocating for same-sex rights. He wasn’t. He was just pointing out the hypocrisy within the church on this issue.

Isn’t it amazing, though, how the church was accused of doing something wonderful, and they felt the need to do “damage control” and basically tell everyone, “That’s not what we meant!”?

July 29, 2015 Bogus Claims from Anti-Abortion Group Won't Help Efforts to Defund Planned Parenthood
Browse Our Archives
What Are Your Thoughts?leave a comment