For some reason, I was getting a lot of angry email from Christians yesterday morning telling me that if I didn’t like “In God We Trust” on our money, I shouldn’t use it. I had no idea what prompted them to use JesusLogic on me until I saw this clip from yesterday’s episode of Outnumbered on Fox News Channel. The hosts were discussing a Missouri Sheriff who put a sticker with the Godly phrase on all the department’s vehicles.

One of the guest hosts, Democratic strategist Julie Roginsky, did something during the segment that you don’t normally see on Fox News: She made sense. 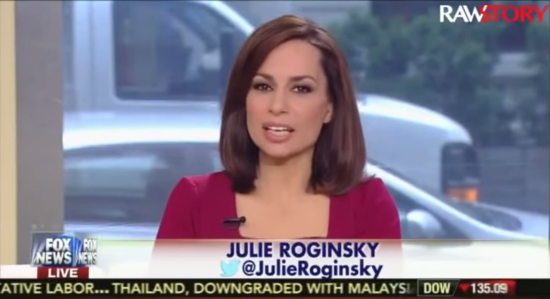 I’m gonna say something that’s going to get me so much hate mail… I don’t agree with the court. Separation of church and state means if you want to put “In God We Trust” on a bumper sticker and put it on your car, great. Don’t put it on my money, don’t put it on government property, take it out of the Pledge of Allegiance.

She added that while it might be legal for the Sheriff to put the phrase on his department’s cars, that didn’t make it a good idea because it was so divisive and “offensive to atheists and to other people who may not believe in God.”

(Cue eye rolls from everybody else.)

But whoa! She made a sensible point! The government shouldn’t be in the position of promoting religion, even if (as Andrew Napolitano later argued) the phrase is relatively innocuous at this point.

Don’t fear, though. Andrea Tantaros was there to bring the conversation back down to the low standards of Fox News:

How do you think they purchased the cruisers? With Monopoly money?

No, it says “In God We Trust” on the dollars that were used to buy the cars!

By Tartaros’ logic — two words that don’t look right side by side — it’s okay to promote God on government vehicles because the phrase is on our money.

Put another way, a Christian majority used the government to explicitly promote their faith several decades ago… and we should keep the charade up now because “tradition” has set in.

Just because we use paper money doesn’t mean we approve of the phrase. Just because students are pressured to say the Pledge in school doesn’t mean they’re okay with it. That’s what Roginsky was saying and it was a breath of fresh air coming out of Bullshit Mountain.

Tartaros closed the segment by saying if atheists wanted to avoid seeing the police cars with the “In God We Trust” stickers, all they had to do was not get arrested.

Which is ridiculous. We could also avoid hearing idiotic arguments by not watching Fox News, but it doesn’t mean they’re not there. Our goal isn’t to avoid it; it’s to stop the ignorance entirely.

We have a long way to go.

July 28, 2015
9 Things You Should Know About Jehovah's Witnesses
Next Post