I know Bryan Fischer has no credibility outside his Christian bubble, but he outdid himself with his latest lie. Usually, Fischer and his buddies (like pseudo-historian David Barton) take a shred of truth and wildly distort it to suit their needs. In this case, even that bit of truth was missing. 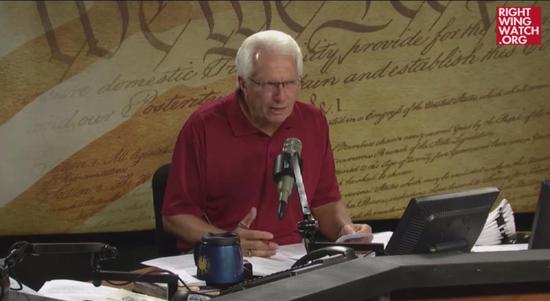 His statement involved the movie theater shooter in Lafayette, Louisiana. What do we know about John Russell Houser? According to his social media statements, he hated liberals and supported the Westboro Baptist Church. He even once jokingly said he supported President Obama‘s election because:

… The way I see it,the faster he wrecks this nation, which in no way resembles what it’s founders envisioned,the faster working people with morals may re-assume command.ie I was for his re-election. I like his spending habits.etc

That’s like me saying I can’t wait for Mike Huckabee to become President because then everyone will see how disastrous it is for the Religious Right to take over the government, and it’ll never happen again. Get it?

On his show Friday, he claimed that Houser supported Obama.

Period. No context. No explanation that it was sarcasm. Just that Houser supported Obama:

… [Houser] claimed to be affiliated with the Tea Party Nation, then [the media] found out, well, he filled out a profile in 2013 but he never gave, he never donated anything, he never participated, he never contributed anything, there’s no picture of him, nobody has ever met him in a Tea Party group. So that all fizzled out. And then it turns out that he supported Barack Obama! He was a big time Barack Obama supporter, voted for him in 2012, so all the air has gone out of that balloon.

And don’t bother trying to use the excuse that he just spoke too soon. If his information said that Houser supported Obama, it must have been in context. He purposely ignored the extra relevant information so that he could tell a lie to his gullible audience — Christians who are trained not to question anything people like Fischer tell them.

These are the lies that conservative Christians tell themselves because reality clashes too much with their worldview. What’s scary is that there are tens of millions of them in the country.

July 28, 2015 High School Ten Commandments Monument Will Stay After Judge Says Plaintiffs Didn't Have Proper Standing
Browse Our Archives
What Are Your Thoughts?leave a comment