I would love to know who these people are who think asking Pat Robertson for advice is a good idea. On today’s episode of The 700 Club, someone asked why pro-choice Supreme Court justices “all live to be such an old age.”

The right answer would be: “Because their decisions have nothing to do with their life spans. Obviously. Why the hell do you even have to ask?” (Unquote.)

That’s not what Robertson said: 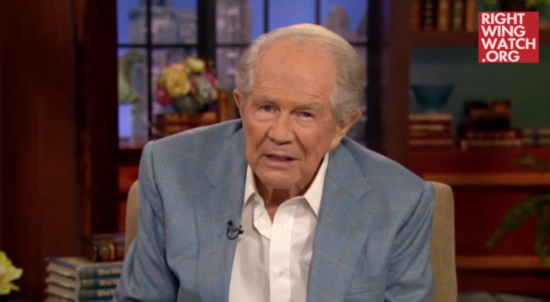 You’ll have to ask God why he didn’t kill them. I’m not in charge of the death or life of the Supreme Court judges. It’s in God’s hands whether they live a long life…

Okay, so even Robertson appeared to laugh off the question itself at first. But it didn’t stop him from (seriously) connecting abortion to the supposed racism of Planned Parenthood founder Margaret Sanger.

July 27, 2015
At Meeting, School Board Member Rants Against Gay Marriage and Says Racism is Over in America
Next Post