Humanism Will Now Be Treated as a Religion in the Federal Prison System July 27, 2015 Hemant Mehta

The Federal Correctional Institution in Sheridan, Oregon — a part of the Federal Bureau of Prisons — houses nearly 2,000 inmates. 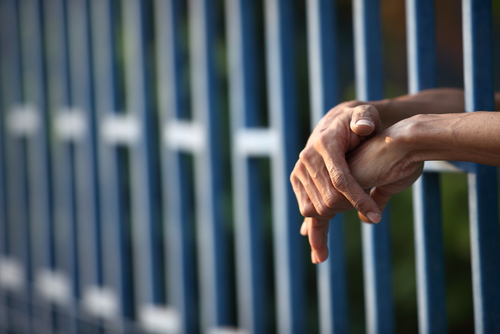 Those inmates, upon arrival, can designate a religious preference — which is how we know the religious makeup of inmates who volunteer that information. 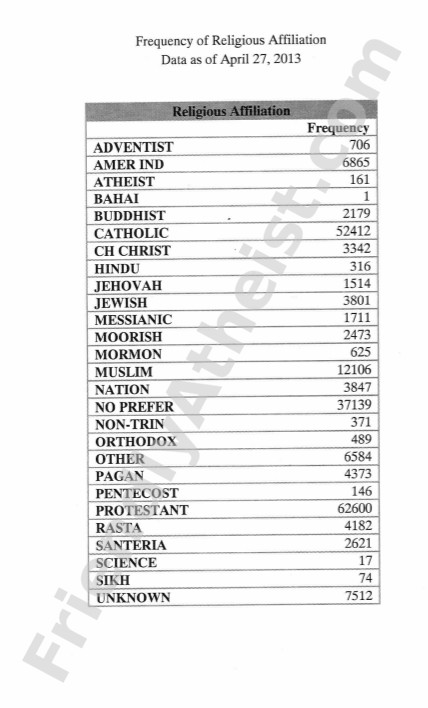 The list of available religions, as you can see, doesn’t include Humanism.

Last year, an inmate sued to change that.

Jason Michael Holden is an inmate at FCI Sheridan and a member of the Humanist Community of Silicon Valley. And more to the point here, he viewed his beliefs as a religion:

Humanism is Holden’s religion, which comforts and guides him in the way that religions traditionally provide such comfort and guidance. By practicing Humanist principles in his relationships, he is confident that he is acting in a positive way. Seeing things through a Humanist lens creates within him a spiritual connection with the natural world. Humanism gives Holden inner peace and security and has helped him realize the natural gift of his life.

For him, Humanism went far beyond mere atheism. Atheism, he argued, was an inaccurate way to describe him. It was like describing a Muslim as a “theist” — too vague to be useful.

A few years ago (about two years after he entered the prison), Holden requested that his religious designation in the prison system be “Humanist.” But he was told that, since that wasn’t an option, he could just check the box marked “atheist.” He did… but that meant giving up a few of the privileges afforded to religious inmates:

Humanist inmates cannot meet in study groups in the same way inmates who are members of FCI-recognized religions can meet.

Humanist inmates at FCI Sheridan have no venue for meetings.

Atheist inmates at FCI Sheridan have no venue for meetings.

Inmates are not allowed to assemble in groups of more than four at recreation.

FCI-recognized religious inmates are permitted to meet in groups of more than four to discuss their religious beliefs with each other during a designated time period.

You can see the problem here. If you say you’re religious, you get a number of perks not afforded to non-religious groups. Atheism is not a religion; Humanism, arguably, is. But since the Federal Bureau of Prisons didn’t give Humanist inmates that option, they were left without a religion that accurately described them — as well as the perks they would otherwise be granted.

With all that in mind, the American Humanist Association’s Appignani Humanist Legal Center filed a lawsuit in April of 2014 against the Federal Bureau of Prisons (and several of its officials) to change all this.

“The federal prison system has unfairly discriminated against atheist and humanist inmates simply because they lack a belief in God,” said Monica Miller, attorney for the American Humanist Association’s Appignani Humanist Legal Center. “It’s unconstitutional for the prison to give inmates of theistic religions special treatment. Humanist inmates should be entitled to meet and study together to the same degree as their theistic counterparts.”

The issue at play seemed to be one of ignorance. The Federal Bureau of Prisons felt it had all the major belief systems covered, but the AHA listed reason after reason why Humanism should be considered a religion alongside the other options on the list. This should have been a quick and easy change, especially when you consider, as the lawsuit notes, that “in the time that Holden has been incarcerated at FCI Sheridan, at least seven other inmates at FCI Sheridan selected the religious assignment ‘Atheist’ after requesting ‘Humanist’ and being told it was not an option.”

So this wasn’t just an isolated incident. There were undoubtedly more Humanists in the prison system than, say, members of the Baha’i faith. (Or should I say “member”…) But the latter got all the benefits of religion while the former got none.

As you might expect, the government agency tried to get the motion dismissed for a variety of reasons, from arguing that accommodations offered to Holden made the whole lawsuit moot to saying this wasn’t really an Establishment Clause case. Last November, though, a judge dismissed that request, allowing the lawsuit to proceed.

Which brings us to the most recent development. The AHA announced today that they had “reached a favorable settlement with the Federal Bureau of Prisons.”

… the Federal Bureau of Prisons will acknowledge humanism as a worldview that deserves the same recognition as theistic religious beliefs. The Manual on Inmate Beliefs and Practices will include a section on humanism, and inmates may identify as humanists for official assignment purposes. The prison will also authorize humanist study groups and permit humanist inmates to annually observe Darwin Day.

“The constitutional rights of humanists have been vindicated, and humanist inmates will no longer face discrimination simply because they lack a belief in a god or gods,” said Monica Miller, an attorney with the Appignani Humanist Legal Center.

In addition, the Federal Bureau of Prisons will pay the AHA $98,300 in legal fees.

I should point out that not all Humanists agree with this decision. They don’t believe Secular Humanism (under the Humanism umbrella) ought to be classified as a religion, though they agree Humanists should be treated the same way as religious inmates. It’s a subtle, but important, difference. This is more of a philosophical question, of course, but it could be relevant if this case is used as precedent in the future.

July 27, 2015
There Was Nothing Wrong with Richard Dawkins' Tweet That "Islam Needs a Feminist Revolution"
Next Post