What would you include on a list of the “greatest attacks of terror on America”? Maybe 9/11? Pearl Harbor?

Pastor John MacArthur of Grace Community Church in California says you’re all wrong. Those attacks were nothing compared to what’s on his list: 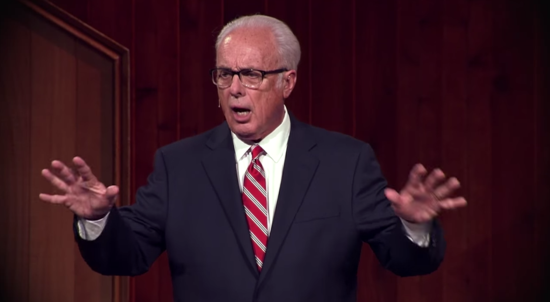 The two greatest attacks of terror on America were perpetrated by the Supreme Court. Not by any Muslim, but by the Supreme Court of the United States. The first one was the legalizing of abortion. Subsequent to that, there have been millions of babies slaughtered in the wombs of their mothers. It’s incalculable to even comprehend that. The blood of those lives cries out from the ground for divine vengeance on this nation.

The second great act of terror perpetrated by the Supreme Court was the legalization of same-sex marriage. The destruction of human life in the womb — in a sense, the destruction of motherhood — and now the destruction of the family itself. No bomb, no explosion, no attack, and no assault on people physically can come anywhere near that kind of terrorism. Our country is being terrorized by the people most responsible to protect it — those who are to uphold the law.

You know, in a perverse way, I can at least understand why he’d include abortion. If every zygote is human, then abortions and miscarriages are like murders. I’m not saying it’s a convincing argument, but I get his perspective.

But a gay couple getting married?! Only religion could warp your mind so badly that you think two guys declaring their love for one another is worse than 9/11.

MacArthur was only getting started with his long sermon full of bullshit rhetoric:

This is not about same-sex marriage. This is about the total obliteration of the family. So that there will be no more family, no more covenants. No more private, sovereign units that stand up against the corruption. If you go back to contraception, you go back to where this all began. It is the product, admittedly, of the feminist movement. Go back through contraception; now when contraception comes in, you have sex without children. For the first time, the greatest restraint against having sex is eliminated. The greatest natural restraint against having sex with just anybody any time was children will be produced possibly.

Riiiight. Families will now disintegrate because gays and lesbians want to start families. Every time a lesbian says “I love you,” Jesus gets re-crucified.

MacArthur, who thinks procreation is the only purpose of sex, can’t handle the idea of two people fooling around for… what’s the word?… oh, right. Fun.

We’ve come all the way from sex without children to, listen to this, children without sex. You can manufacture a baby. Two lesbians can have a baby. A lesbian can have planted in her womb a living being from somebody else. Children can be manufactured. The normal reason for marriage, a man and a woman coming together to produce children, has been completely convoluted. Most people, it seems to me, would rather have a dog. So now you can have sex without children, and now you can have children without sex. You can just make them. Why do you need a family? Why do you need a husband? Why do you need a wife?

MacArthur has no problem, presumably, with the marriages of older couples or infertile couples or non-Christian couples or couples who just don’t want kids. He just has a special place in his non-existent heart to condemn gay and lesbian couples. Because ewwwww, that’s why.

He can’t bring himself to even say the word “transgender”:

Transvestism, as it used to be called, is not new. By the way, it is an abomination. That abomination is the exact same word used in Leviticus 18 to refer to homosexuality.

Chapter 22 of Deuteronomy also says, “Do not wear clothes of wool and linen woven together.” It’s in the exact same list of sins. But silly me, actually reading the Bible instead of having a bigot pastorsplain it to me.

Let’s hear more of his “wisdom”:

Barry Lynn, who heads up an organization — a hostile, satanic organization against the gospel and against the Word of God — is making all the moves he can to make sure churches lose their tax-exempt status. And the way they’ll do that is they’ll begin to sue and drag the churches into court on that issue.

Complete bullshit. For all this Bible talk, MacArthur doesn’t give a damn about the Commandment against lying, does he?

Barry Lynn, a reverend who heads up Americans United for Separation of Church and State, has no desire to take away the tax-exempt status of churches as long as they follow the rules for all tax-exempt groups. That means no endorsing political candidates from the pulpit.

Don’t worry, though. MacArthur isn’t all fire and brimstone:

There you go. I love you and God loves you, and that’s why we both agree you should be tortured for all of eternity.

If I said every Christian in the world deserved to go to jail for a month, I’d be guilty of hate speech. But if a pastor says gay people ought to be tortured forever, it’s a sign of love.

MacArthur is the reason so many people are running the hell away from Christianity. Not just because he’s saying stupid shit — there are lots of pastors just like him — but because all those people in the congregation are quietly nodding along. So many Christians who aren’t in that audience refuse to speak out against pastors like him. Their silence speaks volumes.

No decent person should want any part of a faith this abhorrent.