An Anti-Muslim Cop is Furious with Me for Sharing His Social Media Postings with His Superiors July 25, 2015 Hemant Mehta

A few days ago, I pointed out that officials at the Stone’s County Sheriff’s Office in Missouri put “In God We Trust” stickers on every vehicle they own:

They might be able to get away with it by claiming it’s “just” the nation’s motto, but we all know it’s really a ploy to promote Christianity through any means possible. This is a Sheriff’s Office, after all, that has a Bible verse right on the front page of its website.

I wrote at the time:

Makes you wonder if they’re more committed to following the Bible or the Constitution. Do atheists get punished disproportionately in this community? Is there a religious test to become an officer?

That was the extent of my frustration, by the way. You can read the post for yourself.

So I just laughed when I saw a right-wing website use the headline “Sheriff puts ‘In God We Trust’ on ALL patrol vehicles; Friendly Atheist comes unglued!”

If that post was me coming “unglued,” I’d hate to see what happens when I actually get angry…

But that’s not really why I’m writing this. 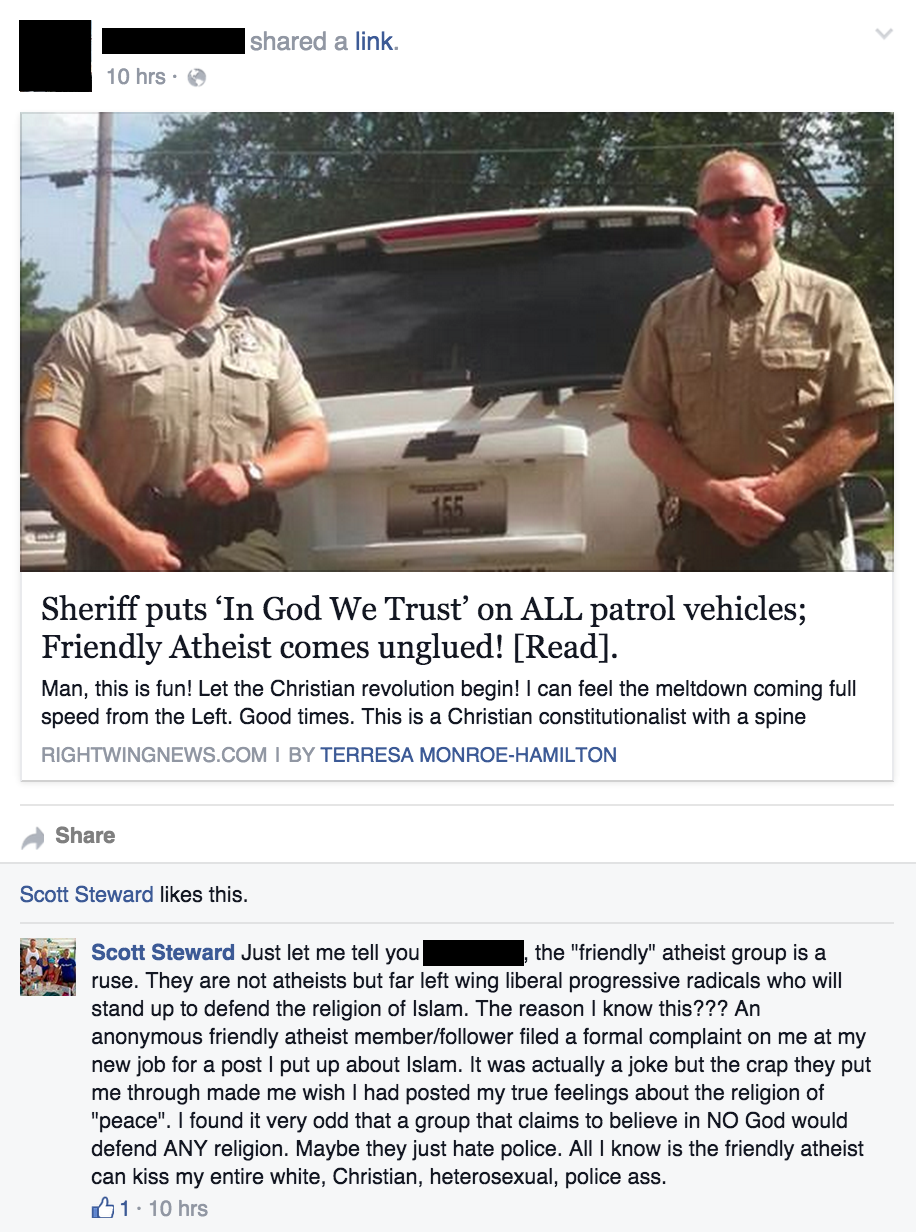 Just let me tell you… the “friendly” atheist group is a ruse. They are not atheists but far left wing liberal progressive radicals who will stand up to defend the religion of Islam. The reason I know this??? An anonymous friendly atheist member/follower filed a formal complaint on me at my new job for a post I put up about Islam. It was actually a joke but the crap they put me through made me wish I had posted my true feelings about the religion of “peace”. I found it very odd that a group that claims to believe in NO God would defend ANY religion. Maybe they just hate police. All I know is the friendly atheist can kiss my entire white, Christian, heterosexual, police ass.

Besides assuming I control an army of radicals (Alas, I do not), and besides wanting me to kiss his entire heterosexual ass (which, by the way, is Christian and white), Steward claims someone ratted him out for a joke he made about Islam.

That someone was me. Here’s the “joke” he made earlier this year: 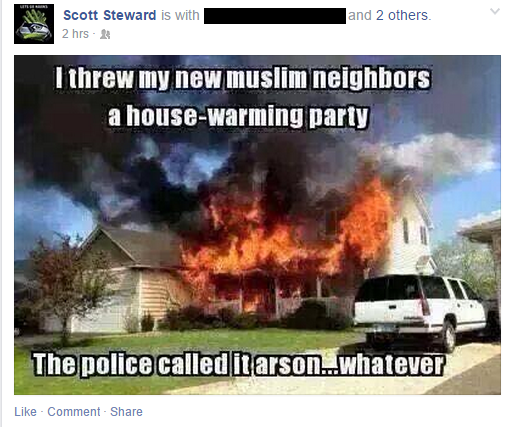 This guy’s just hilarious, isn’t he?… And, unless there’s another officer who shares his name, Steward investigates arsons.

So, yes, I contacted the State Police when that happened because I had serious concerns about whether this guy could be trusted to help Muslim citizens in the area. If he thinks setting a Muslim family’s house on fire is a joke worth sharing on social media, we should all be disturbed.

State officials told me they would speak with him. That’s the last I heard about it.

But since he’s still so eager to share his “true feelings about the religion of ‘peace'”… my concerns are renewed. You don’t have to agree with Islam to defend Muslims who have enough bigotry to deal with without having to wonder whether a police officer will be there for them in a time of crisis.

I contacted State officials again. We’ll see if they do anything.

In the meantime, maybe one of you can explain to me how his ass became Christian. Was there a ceremony? Was the toilet a baptismal pool? Do you have to wipe after taking communion?

July 25, 2015 Former CEO Accused of Sending $510,000 of Company Money to Psychics
Browse Our Archives
What Are Your Thoughts?leave a comment