According to parishioners at Saint Charbel’s Maronite Catholic Church in Sydney, Australia, a picture of the Virgin Mary has come to life and is joining them in prayer! Or at least her mouth is… 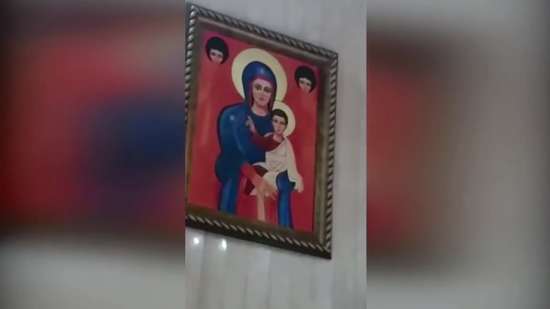 “Once I looked up, I had no idea what they wanted me to look at and I saw her [the Virgin Mary] mouth moving. I then asked my friend; ‘Is it her mouth?’ She replied ‘yes.’ and then I got the shivers throughout my whole body. I couldn’t believe my eyes, I kept blinking in case I was seeing things,” [Kirsten Keirouz] wrote.

After watching Kristen’s recording, fellow parishioner George Akray decided he would make a recording on Sunday July 19 that he later uploaded to Facebook.

“This is something I had seen a few times,” Mr Akray said. “This time I recorded it.”

The delusions are strong in these people…

I’ve watched the video a few times and still see no change. It sounds like the power of suggestion: Someone thought she saw the mouth moving, so the next person was primed to see the same thing. Now that several people have “seen” it happen, those watching the video are looking for anything that will confirm their biases.

Even on Facebook, commenters are saying it looks like pixel distortion or bouncing light inside the church rather than anything miraculous.

Here’s what I don’t get: If these people are so convinced the mouth is moving, why is every video taken from so far away?

Get a ladder, get a better camera, and do some close-ups. (Or is everyone too afraid to discover the truth?)

You know who else isn’t convinced? The priest!

Not all are convinced by the video, however, and Saint Charbel’s Father Superior Joseph Sleiman said that he believes parishioners are seeing an optical illusion rather than a miracle.

When a priest tells you This isn’t God working in mysterious ways; you’re all fooling yourselves, it’s time to close up shop. There’s nothing to see here.

July 23, 2015
Richard Dawkins Responds to $58 Million Lawsuit from Man Who Says the Scientist Called Him Stupid
Next Post