Here’s some Christian-on-Christian persecution for you.

The Metropolitan Community Church of Our Redeemer in Augusta, Georgia is one of those churches welcoming to LGBT people. In fact, Pastor Rick Sosbe and his partner were the first to get a marriage license after gay marriage became legal in the state.

But weeks after a rainbow flag was stolen from the front of the building, staffers at the church arrived Tuesday morning to see this: 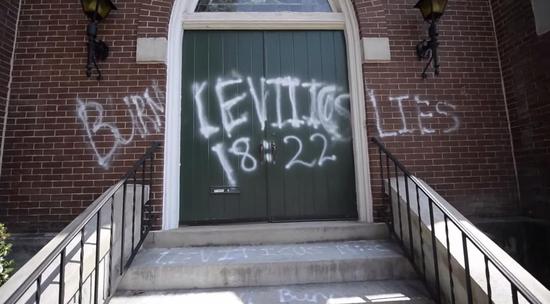 Leviticus 18:22 is the verse that reads “Thou shalt not lie with mankind, as with womankind: it is abomination.”

[Sosbe] said a church member texted him a picture of the vandalism as he was preparing to go to the church for his regular office duties.

“I was angry. I was very sad and I thought, ‘Just why?’ To me, it seems so interesting that they’re saying on there that you’ll burn — in other words saying ‘You’ll burn in hell,’ I’m sure — and quoting scripture. Is that what Christianity — right-wing, fundamentalist Christianity — has come to?” he said.

At least people came together in defense of the church:

On Tuesday evening, about 50 members of the church, Augusta Pride and supporters of the LGBT community held a rally on the church steps as a show of solidarity.

Takya Browning, president of Augusta Pride, said when she learned of the vandalism, she was hurt, sad and angry, but said she believes it points to something bigger.

“Just because we had marriage equality come down does not mean that everything is roses and rainbows,” Browning said.

This is what a group of liberal Christians has to deal with for the crime of being too tolerant.

Not that you’ll hear that from the Religious Right. Conservative Christians are really the persecuted ones because, you know, they get paid to make cakes for customers they may not like.

I have to agree with my Patheos colleague David R. Henson here:

Real Christian persecution is having your church burned to the ground because black people worship there.

Real Christian persecution is having your church graffitied hatefully because gay and lesbian people can worship there.

Even if conservative Christians denounce this vandalism, it’s not like their overblown rhetoric is any better. When you tell people they’re not real Christians because they don’t toe the party line, or suggest they’re going to be tortured for all of eternity because they’re not following a specific interpretation of God’s will, it’s just another form of the same hate.

***Update*** (7/23): The church is doing a fundraiser online to help buy security cameras. Feel free to chip in if you’d like.