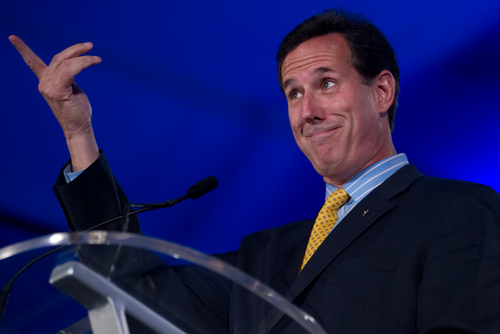 Maybe Santorum doesn’t understand the importance of a good public school education. Part of what good schools do is expose students to people and cultures they might not otherwise know about.

Most of us grew up with straight parents or in communities where most couples were straight. We all knew about the importance of marriage. I don’t necessarily need to read a book about straight marriages because I’ve lived it. But reading novels featuring marginalized people or histories/first-hand accounts written by those who didn’t “win”? That was powerful. Not only would I probably not have done that on my own, I was also able to gain some new perspective.

It’s the same reason I don’t need to read a book called, A Day in the Life of a White Person. We all know the gist of it before opening the first page.

That’s why it’s so valuable for grade schools to offer books with two lesbian parents. They teach kids from a young age that some of their classmates may have a slightly-different home life. It doesn’t suggest one kind of marriage is better than another. It says “You may not know about this, so let me introduce it to you.”

To people like Santorum, acknowledging the existence of LGBT people is a form of anti-Christian moralizing. Just because he’d like to replace every school book with the Bible doesn’t mean students aren’t inundated with “traditional” lessons all the time.

Oh, and if Santorum wants books that extol the value of marriage, a book like Heather Has Two Mommies would be perfect! Glad to see him giving it a stamp of approval.