Mount Soledad Cross Transferred to Private Land, Ending a Battle That Began Over 25 Years Ago

Yes, we are still talking about the Mount Soledad cross.

Here’s a quick recap in case you’re unfamiliar with the story: The controversy, which began more than 25 years ago, is the longest-running Establishment Clause case in American history.

It involves the Mount Soledad cross in San Diego — a huge cross on public land erected in 1954. While it’s marketed as a veteran’s memorial, it’s very clearly intended to promote Christianity and honor only Christian soldiers.

After the now-deceased Philip Paulson challenged the cross’ constitutionality more than two decades ago and after atheist Steve Trunk took up the case after that, atheists have generally prevailed in the court system. In 2012, the Supreme Court declined to hear any more challenges from Christian groups, putting the future of the cross back in the hands of lower courts. 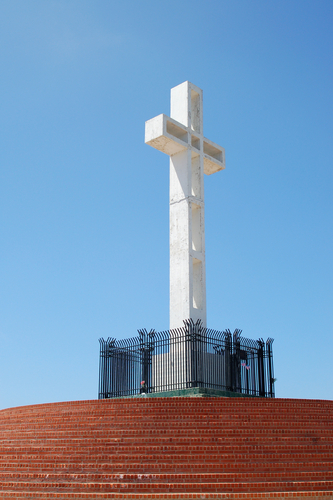 Last year, the U.S. House passed a bill that would transfer the land on which the cross rests to a private Christian group so that it’s off government property, making it legal once again. (Sneaky, eh?) The provision was tucked into the “National Defense Authorization Act for Fiscal Year 2015.” 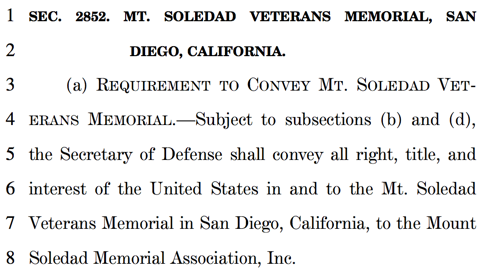 [Rep. Duncan Hunter Jr.’s] provision stipulates that the defense secretary convey the memorial to the local association after agreement is reached on price. The association and any subsequent owner would be required to maintain the structure as a veterans memorial in perpetuity.

The Mt. Soledad Memorial Association, the veterans group that maintains the memorial, announced Monday that it has purchased the half-acre of federal land on which the 29-foot Latin cross stands from the Defense Department for $1.4 million.

The memorial for Christian soldiers is now officially on private land, and the long-running saga may finally be over. It’s incredibly convenient that Christians could just buy the property from the government rather than take down the cross altogether — would any other group have received such a favorable deal? — but purchasing the land is an admission of sorts that this cross never should have gone up in the first place.

(Large portions of this article have been posted before. Image via Shutterstock. Thanks to Brian for the link)

July 21, 2015
How a Former Chaplain Ditched Her Faith and Helped Others Get Away from God
Next Post