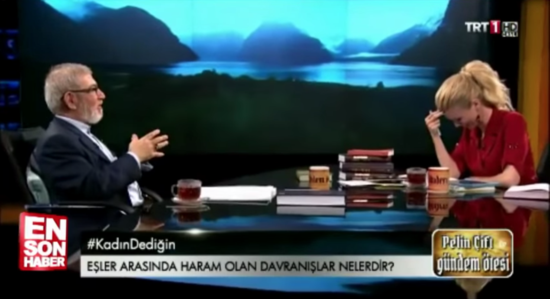 Another Muslim theologian, Ahmet Mahmut Ünlü, has now gone on record as saying his colleague was wrong and that oral sex is fine.

But the way he explained it was all sorts of cringe-worthy:

Contradicting Demircan, Ünlü said the Quran does not stipulate such a ban. “Brothers, let’s speak frankly: [Islam’s] Shafi’i sect allows this act, as it considers human semen a clean substance. On the other hand, the Hanafi sect considers semen as dirty, but adds that a dress can be cleaned by simply rubbing the semen off when it dries.”

There you have it. Semen is okay. And dried-up semen comes off rather quickly. (Heh.)

That concludes another edition of The Worst Sex Advice Column Ever.

July 21, 2015
Mount Soledad Cross Transferred to Private Land, Ending a Battle That Began Over 25 Years Ago
Next Post

July 21, 2015 Vote to Remove “Jesus Welcomes You to Hawkins” Sign in Texas Delayed Following Mayor's Concerns
Browse Our Archives
What Are Your Thoughts?leave a comment