Last year, we learned about a public high school football team that was just overwhelmingly infused with religion. And there was proof.

Like a picture of a team prayer (that included coaches):

And a Bible verse on the team’s workout log sheet:

And a religious banner hoisted up by cheerleaders during one of the games: 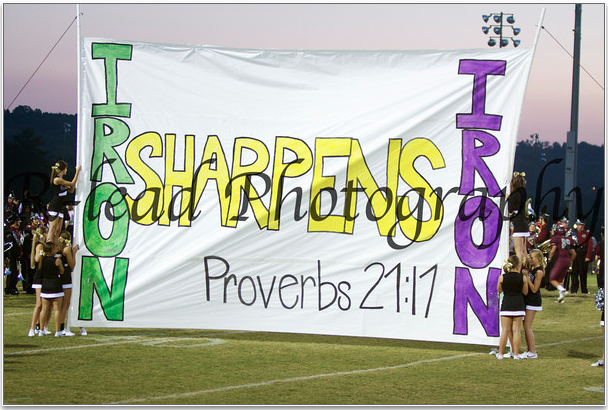 All of those images come from the Chestatee High School football team in Gainesville, Georgia. Last August, the American Humanist Association’s Appignani Humanist Legal Center sent Hall County School District administrators a letter warning them about the legal implications of coaches pushing faith onto the students:

We have been informed that the school’s football coaches have been using their position to promote Christianity on the football team by integrating Bible verses into functional team documents and team promotions in various ways; meanwhile, they have been either leading the team in prayer or participating in team prayers on a regular basis. This type of religious activity, by government employees in the course of their duties as public school football coaches, is a clear violation of the Establishment Clause. This letter demands that CHS coaching staff cease leading, participating in, or encouraging team prayer, and that the school remove all Bible verses and other religious messages from team documents and related materials

District officials said they would investigate the matter. When Superintendent Will Schofield finally said something, it was to the local media, where he all but dismissed the allegations because of the source:

“I don’t spend much time reacting quickly to letters from people who live a thousand miles away,” said Schofield…

Keep in mind the letter was sent on behalf of people in the community. For all we know, that included someone on the team.

Schofield did, however, send a memo to all school employees reminding them of what the law said:

… The Hall County School District wholeheartedly defends the almost unlimited rights of students to exercise their religious beliefs. As long as activities do not infringe upon or disrespect the religious beliefs of others, or disrupt classroom instruction or school routines, students have the right to pray, read religious materials, talk to their classmates about their beliefs, and following district protocol, form clubs or associations with students who share similar interests. Voluntary, student-led prayers fall within these criteria.

Hall County Schools will continue to be a place that celebrates our nation’s founding principle of respecting differing viewpoints. Once again, as long as the expression of individual beliefs is not disruptive or harmful to others, we will cultivate and strive to model a culture of respect.

By law, and under current legal interpretation by the courts, public school employees on the job do not enjoy the same level of religious freedom at school as do our students, yet their religious rights do not evaporate at the schoolhouse gate. Teachers, coaches, administrators, and other school employees may live out their faith in a variety of ways; however, they must not be leading students in prayer during school or school-sponsored activities, nor may they require or pressure students to participate in religious activities.

That was fine… as long as it was enforced. (Though it still didn’t address the Bible verse on official workout sheets.)

By the way, there were other, similar incidents in the District as well. A wrestling coach at the same high school, Carey Whitlow, apparently “discussed Jesus during motivational speeches to the wrestling team.” He also told kids that “Jesus was a wrestler.”

The school’s marching band director initiated and participated in prayers with his players. The band also had official student “chaplains.”

At North Hall High School (also in the District), there was evidence that baseball coach Trent Mongero also joined students in prayer.

When the District finally responded, it was to say all the constitutional violations would be addressed and fixed.

But that didn’t actually happen.

Later that month, in fact, a coach joined in prayer with the football players at CHS before a game, completely ignoring the District’s promise.

Given that the problems were still going on, the AHA filed a lawsuit against the District in December. And today, there was some good news. Both sides reached a settlement:

Under the settlement, the school superintendent will issue a memorandum detailing the standards for religious neutrality required by the Establishment Clause of the First Amendment and the Equal Access Act to the principals in all of its 36 schools. The district will host a training session before the start of the school year for administrators, who will educate staff and coaches on their constitutional duties. The district also agrees to pay the American Humanist Association’s legal fees of $22,500.

“We are pleased that the district is taking productive steps forward to ensure compliance with the Constitution, and we expect that it will stop the student-staff prayer activities and other problematic conduct,” said David Niose, legal director of the American Humanist Association.

All of this could have been avoided if the District simply complied with the law and made sure the coaches they hired weren’t breaking the rules. They didn’t do that, even after being warned. The coaches kept pushing Christianity on the students as if this were Sunday School, and the administrators are finally getting the punishment they deserve.

There will inevitably be critics who say this is Christian persecution. That’s a lie. Everyone involved in this story is still welcome to pray — privately. Students are welcome to pray before a game, too, but the coaches should play no part in that. They cannot push their beliefs onto students when they’re working for a public school.

The Hall County School District failed to protect students from coaches who are more interested in proselytizing than practicing. And you can bet the punishments will be even more severe if they don’t put a stop to it once and for all.

July 20, 2015 Texans Oppose Muslim Cemetery for All Sorts of Racist, Ignorant Reasons
Browse Our Archives
What Are Your Thoughts?leave a comment