ABC’s What Would You Do? Features Angry Atheist Yelling at Praying Family in a Restaurant July 19, 2015 Hemant Mehta

ABC’s What Would You Do? Features Angry Atheist Yelling at Praying Family in a Restaurant

If you haven’t seen ABC’s show What Would You Do? — and you won’t want to after this — the premise is pretty self-explanatory. As the show’s website states, it “establishes everyday scenarios and then captures people’s reactions.” So you might see a segment in which an actor clearly steals an item from a store… and the cameras zoom in on the other customers to see how they react: Do they tell someone or do they ignore it? You get the idea.

On Friday night, the show started out just fine. A military vet went to purchase diapers for his baby, but the cashier told him his credit card was declined. Will anyone help the poor soldier?! (Spoiler: They will! Yay America!)

But the next segment took a strange turn. 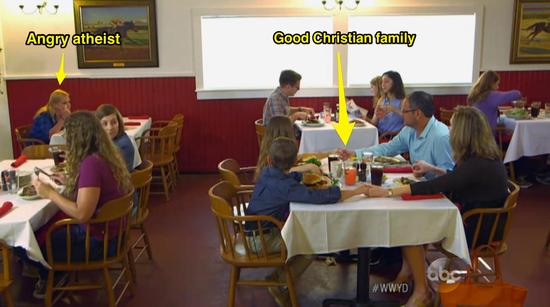 The setup featured a family (of actors) in a restaurant praying before a meal.

Another actor, portraying an atheist, freaked out and started yelling at them to keep their religion to themselves. (“I have a right to eat without you forcing your religion down my throat!”)

The show wanted to see how the other diners would respond.

But that’s irrelevant. Let’s step back and admit that’s an awful scenario to begin with because it’s completely implausible. It’s as if the producers asked themselves how they could portray atheists in the worst way possible and then ran with it.

This isn’t a government meeting. Why the hell would we care if anyone prays at a restaurant? We might not do it ourselves, but anyone who complains in that situation is an asshole, plain and simple.

Am I overreacting? I don’t think so. This isn’t an “everyday scenario” at all. It’s a situation that only exists in the fantasies of the Religious Right.

I know a hell of a lot of atheists and not a single one would ever treat a praying family at a restaurant with that much disrespect.

They ran the scenario four separate times, and each time, the patrons lashed out at the atheist for getting in the middle of the family’s grace. I’m glad they did. But it’s worth noting that a lot of atheists in the same situation would have done the exact same thing.

Unlike the other segments, where there’s some ambiguity about what might happen, this was a no-brainer.

All we learned here was that Christians are awesome and atheists are jerks.

Again, my biggest problem with the segment is that the show tells viewers that these are common situations they might find themselves in one day. in this case, that’s not true at all.

Not that they’ll care, but if you’re as frustrated as I am, you can send your feedback to the network right here. When it asks you to select the program, you’ll have to scroll down to “Show Not Listed.”

Let’s hope that’s a sign of things to come.

***Update***: There’s a huge backlash to this segment on the show’s Facebook page.

(Thanks to Kristin and Renee for the link)

July 19, 2015
Enough is Enough: We Can't Ignore All the Accusations and Cover-Ups and Payouts and Crimes
Next Post

July 19, 2015 GOP Plans to Push Anti-Abortion Legislation Divorced from Facts
"Isn’t the guy she’s talking to the one who claimed Trump would serve a second ..."
swimmerkw Christian “Prophetess”: God Told Me Trump ..."
"I saw an article about that trend of pink/purple/blue (bi pride flag colors) lighting. It's ..."
(((GC))) Angry Christian Mom Condemns “Graphic and ..."
"Ew. Those eggs gross me out. :P"
GrandmascienCe Angry Christian Mom Condemns “Graphic and ..."
"You just now tried to force your tyranny of religion on us again... NO! to ..."
Brien FL County That Opposed Atheist Invocations ..."
Browse Our Archives
What Are Your Thoughts?leave a comment