We know that the lead actors in Ray Comfort‘s anti-gay film Audacity are pro-LGBT rights. We’re not done yet…

I got an interesting email the other day from an extra in the film, who also happens to be an atheist. Mike Martin is a paramedic in the movie. You can see him on the right in the screenshot below: 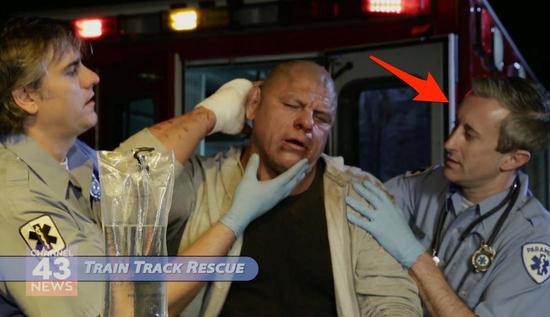 He met Comfort a few years ago when the evangelist was preaching at the Huntington Beach Pier in California. Martin explained it like this:

We debated for 20 minutes until he finally admitted (grinning), “Wow, you really know your stuff”… We became friends after that, randomly messaging each other. A few months ago he asked me, “Are you an actor?” and then asked if I’d play a non-speaking role in his new film…. I disagree with his theology, but apart from that we get along just fine. He’s a funny jokester behind the scenes, and very gracious.

You can see their debate starting at the 0:30 mark in this video:

(At 5:47, they have a conversation about how Ray used to wet the bed. Kind of hilarious.)

In any case, I wondered how Martin justified being in an anti-gay film, even at the request of his new friend. Simple, he said. He would just donate his entire fee to The Center OC, an LGBT community center in Orange County. It’s nothing substantive, obviously, but a nice symbolic move.

July 18, 2015
After Charleston, Atheist Stands Guard Outside AME Church in Colorado So Members Can Worship in Peace
Next Post

July 19, 2015 Rev. Franklin Graham: "We Should Stop All Immigration of Muslims to the U.S."
Browse Our Archives
What Are Your Thoughts?leave a comment