Creationist Ken Ham Explains Why Childbirth is Painful, Ignoring All Scientific Evidence in the Process

About a month ago, Professor Scott Simpson from Case Western Reserve School of Medicine’s Department of Anatomy gave a lecture about childbirth that sounded fascinating: 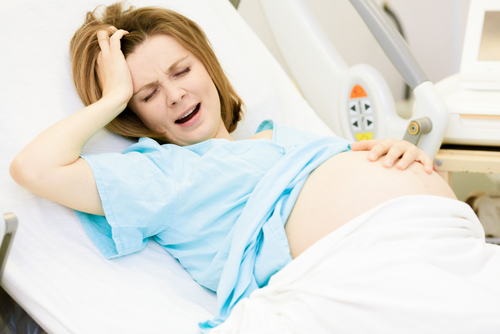 The lecture was titled “Ouch! Why is it so hard to have a baby? An Evolutionary Perspective.”

He said one thing to bear in mind when studying why childbirth is so difficult for humans is that all mammals have a natural drive to procreate, to make more of their own kind.

“Then why would it be so easy for our close relatives like apes and chimps to give birth, when it is so painful for humans?” he asked. “One reason is that we have evolved to walk upright and the human pelvis has tried to accommodate that. Also the human brain has grown, which makes for proportionately bigger heads and a more difficult time getting through the birth canal.”

It’s a completely valid scientific explanation, backed up by plenty of evidence.

But Creationist Ken Ham doesn’t buy this so-called “science.” He knows way better than some “professor” why childbirth is actually painful. It’s stunning, really, that peer-reviewed journals haven’t picked up on this:

So bigger brains and upright walking — that’s why women supposedly have pain and difficulty in childbirth. And that answer is just totally wrong! In fact, anyone who can read the Bible can find out the true answer to that question.

Because Eve took the fruit (being deceived by the devil), we are told what God did:

To the woman He said: ‘I will greatly multiply your sorrow and your conception; In pain you shall bring forth children’ (Genesis 3:16)

And God reminds us in Romans 8 that because of our sin in Adam,

For we know that the whole creation groans and labors with birth pangs together until now. (Romans 8:22)

Evolved bigger brains are not the reason for why there is pain in childbirth — we could say it’s because of fallen brains!

Yeah… that’s why. It has nothing to do with science or evolution. It’s just GodDidIt. No evidence needed. End of story.

This is exactly the sort of warped thinking you get when your standard for evidence goes no further than whatever it says in Genesis. And this is why Ham and the people he works with aren’t taken seriously. The start with the answers and work backwards instead of beginning with the evidence and seeing where it leads.

July 17, 2015 Indiana Reporters Can't Understand Why Local Groups Are on Christian Right's "Bigotry Map"
"Putting incompetents in charge of things is Republican strategy.Set government up to fail then claim ..."
InDogITrust Atheists Sue Ex-Education Secretary Betsy DeVos for ..."
"Two years, TWO!! There's a mid-term election in 2022 to contest."
Don_K Conservative Christians Have a Bunch of ..."
"The Mango Pudding."
Matri Franklin Graham Falsely Claims Christians Weren’t ..."
"Perhaps they misheard God? He does mumble sometimes."
Nullifidian These Christians All Predicted Trump’s Second ..."
Browse Our Archives
What Are Your Thoughts?leave a comment