The Congress of Guatemala is currently considering a bill that would make Bible classes mandatory in the country’s public and private schools as a way to combat the nation’s violence, insecurity, and corruption. Because Jesus is the solution to everything.

The Asociación Guatemalteca de Humanistas Seculares (Guatemalan Association of Secular Humanists) has been quick to speak out against this horrible idea:

It is a situation that must be addressed seriously and comprehensively, with appropriate public policies, and inclusive, not based on the personal religious convictions of public officials or private citizens but scientific evidence for a deep and comprehensive knowledge of Guatemalan reality and respect for human rights of all people.

The imposition of Bible reading in the public, private and cooperative education at all levels is an arbitrary measure based precisely on the religious beliefs of proponents and an alleged “divine revelation” one of them; not in the common good of all citizens. Far from creating unity and positive staff and general level changes, its tax character could generate intolerance, division, disputes and conflicts between students, teachers, administrators and parents.

Yesterday, a member of the group, Carlos Mendoza, went to Congress to speak out against this bill in person… and it didn’t go very well: 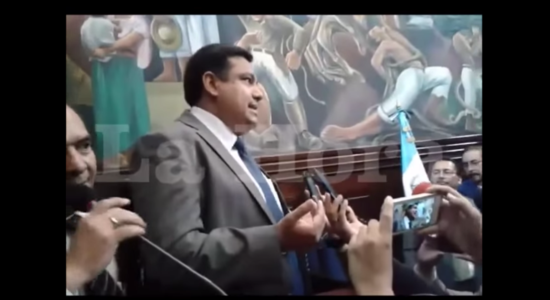 According to La Hora:

In the video you hear as members of an evangelical church they tell Mendoza “Do not talk if you have no foundation” and “bring to Satan” and then booing.

Mendoza described his experience this way:

The MC switched off my microphone and Christians began to shout something like “Crucify him!” — not Heard clearly at both noise and prayers in strange tongues. They pulled me by the arm to get me out of the room, but it was too late, reporters gathered in front of me, defending my right to express dissent peacefully. I talked about the importance of separation between state and religion, and the liberal tradition we have in this regard in Guatemala.

The fear has passed, but I still have a deep sense of sadness because I realized that religious fanaticism is trying to penetrate the Guatemalan state institutions, especially the system of public education in order to indoctrinate children and young people in particular worldview, which corresponds to medieval times.

David Osorio at Avant Garde expressed his admiration for what Mendoza did (emphasis his):

Carlos learned the hard way that arguing with someone who has given up reason is like giving medicine to a dead man. At any rate, it is worth noting his courage, courtesy and poise, which were tested by the bigots and zealots at their worst.

Does anyone need any more proof that Christianity (and any other religion for that matter) is incompatible with democracy?

Despite national law requiring separation of church and state, there appears to be little opposition to this bill. Unless more members of Congress have Mendoza’s courage, it looks like it’ll pass without a problem.

July 16, 2015
Former Ford Employee Says in Lawsuit He Shouldn't Have Been Fired Over Anti-Gay Rant on Company's Website
Next Post