Sherif Gaber is the 20-year-old Egyptian who was arrested in 2013 for starting a Facebook group that included posts about his own deconversion out of Islam. (The police “investigation,” if you want to call it that, was a complete joke.)

This past February, he was given a one-year prison sentence for his “crimes.” But before that time could be served, Gaber was released on bail… and that’s when he ran away.

His whereabouts are unknown.

But he’s not just hiding out, doing nothing. Over the past couple of weeks, Gaber has been releasing some (really good) YouTube videos! Turn on the English subtitles when possible and check these out: 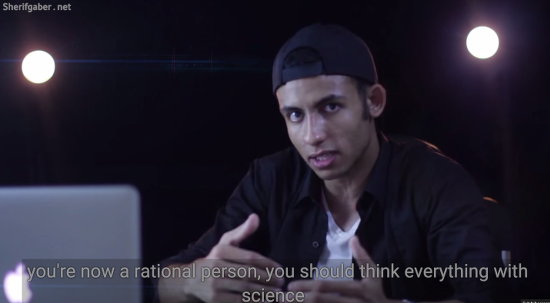 Last night, I asked Gaber what prompted him to make these videos and he told me this (slightly edited):

… You can say I’m a wanted person by the police now. I know they’re gonna arrest me soon or later. That’s why I made the videos. I wanted to say what I wanna say before they get to me.

These videos would be great on their own — but for Gaber to make them given what he’s currently going through? Holy shit, that’s courageous. I hope he stays safe.

(Thanks to Monika for the link)

July 15, 2015
Woman Taken to Jail After Saying Jesus Would Pay Her Restaurant Bill
Next Post

July 15, 2015 Gay Pastor Forced to Resign from Methodist Church Whose Membership He Quadrupled
Browse Our Archives
What Are Your Thoughts?leave a comment