The pro-life world has been buzzing all day about a new video released by the anti-abortion Center for Medical Progress (CMP). It shows a Planned Parenthood executive, Dr. Deborah Nucatola (below), discussing how the group preserves organs from aborted fetuses for research purposes. She also mentions the costs of shipping those organs to scientists.

So, of course, the conservative storyline is that Planned Parenthood is “sell[ing] the body parts of infants” for cash… which, despite making for a great headline, contains very little truth. (Sarah Palin would be proud.) 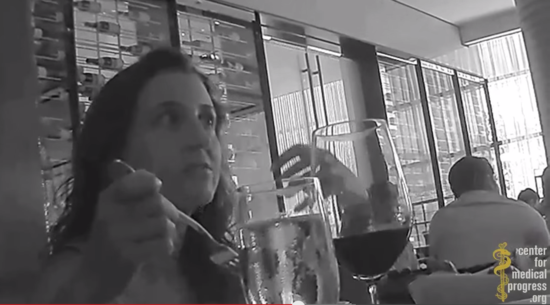 The bulk of the attention is on the graphic way Nucatola describes the preservation of organs. It’s you’re not used to discussions about body parts, it might rub you the wrong way. That’s precisely why the video has impact: emotions sway people more than facts. And the facts go against the conservative myths already building around this video.

Here’s the deal: Selling body parts is illegal; donating tissue is fine. Some mothers who opt to have abortions may agree to have their fetus’ organs donated for the sake of science. They don’t get paid for it. Neither does Planned Parenthood. It may sound controversial, but the alternative is to let the organs go unused.

It’s no different than when people die and their (perfectly good) organs are donated to someone else who might need it. If I described the process to you in detail, you might be disgusted, but the principle behind it is actually pretty damn noble.

Amanda Marcotte made a similar point at Slate:

Abortion is gross, no doubt about it. It becomes grosser the later in a pregnancy it gets. But so is heart surgery. So is childbirth, for that matter. We don’t deny people who need help in those cases because the help is gross. Nor should we deny people that help when it comes to needing abortion. We also shouldn’t deny women who want to donate fetal or embryonic remains to science any more than we would deny someone who wants to be an organ donor, even though the latter is also quite gross to ponder.

When the CMP claims Planned Parenthood is guilty of “illegal trafficking of aborted fetal parts,” that’s a lie. They don’t provide any proof of that, anyway. No one’s selling these body parts on the black market. No one’s cashing in on abortions. More importantly, no one’s pressuring women to have abortions in order to obtain these body parts.

By the way, the only time money enters into the organ equation is when Planned Parenthood is reimbursed the costs of transporting the organs to research facilities.

Planned Parenthood’s Vice President of Communications Eric Ferrero made this very clear in his own statement:

At several of our health centers, we help patients who want to donate tissue for scientific research, and we do this just like every other high-quality health care provider does — with full, appropriate consent from patients and under the highest ethical and legal standards. There is no financial benefit for tissue donation for either the patient or for Planned Parenthood. In some instances, actual costs, such as the cost to transport tissue to leading research centers, are reimbursed, which is standard across the medical field.

What you have in the video is the equivalent of a math teacher explaining how calculus works while scary music plays in the background. Most people won’t understand it at all, but the terminology and visual cues will make them believe something horrible is going on.

Since most viewers of CMP’s video will never bother to look into the facts, they’ll just believe whatever bullshit they’re fed.

These explanations are irrelevant, though, to the conservatives who will use any leverage they can to make it more difficult for women to obtain abortions.

Already, GOP Presidential candidates have declared the video “sickening” and “outrageous.” Louisiana Governor Bobby Jindal already announced a formal investigation into Planned Parenthood… which will go nowhere but might help him edge closer to Donald Trump in the polls.

None of this is surprising. But what else do you expect from people who don’t give a shit about science, women, or facts?

They’ll pounce on whatever red meat anti-abortion activists throw their way, casting aside anyone who explains what’s really going on when you take away the hype.

July 14, 2015
How Atheism Can Be a Form of Betrayal in the Black Community
Next Post