Proposed Irish Law Would Extend Anti-Discrimination Protections to LGBT Teachers, but Not Atheist Ones

Ireland’s Employment Equality Act basically says employers cannot discriminate on the basis of things like gender, marital status, age, race, etc. All good ideas. But as with all laws, there are exemptions. And those are covered in Section 37.

That part says that religious institutions (like churches, schools, and hospitals) — even though most are state-funded — are allowed to discriminate on the basis of religion if it’s reasonable to do so for that tradition. So if your faith says priests have to be male, it’s not legal discrimination if Church leaders don’t hire any women for that position.

But when does it become unreasonable?

Should all religious schools be allowed to discriminate against LGBT individuals or atheists whenever their leaders want?

That’s a serious question because religious leaders have been doing just that. Politician Paul Murphy explained it this way:

Given that close to 95% of our primary schools, 50% of our secondary schools and many of our hospitals are church-run, this is a particularly serious issue. The legal meaning of this section is to permit discrimination against workers to maintain the religious ethos of the institution. In practice, it means that LGBTQ teachers and atheist hospital workers can be legally discriminated against.

There’s just no reason for, say, a Catholic hospital to discriminate against atheist nurses. That has nothing to do with protecting Church tradition.

That’s why an amendment to the law would help fix all that. And one was suggested! Unfortunately, it was incredibly narrow:

As a result of Labour’s commitment to this issue, the Programme for Government included a commitment that “LGBT people should not be deterred from taking up employment as teachers in the State.” This legislation will deliver upon that commitment.

So LGBT teachers would be protected — which is great — but that’s it. What about atheists and people of non-Irish-Catholic faiths? They were left out of the bill, meaning school officials could still fire open atheists with no legal repercussions.

Atheist Ireland is one of the groups that has been working hard to fix this. Check out how they explained the teacher situation:

Schools will still be able to insist that all teachers have a Catholic Certificate in Religious Studies before they are employed in the school. The vast majority of schools are Catholic schools. It is nearly impossible to get employment as a teacher without this Certificate and it is also needed for promotion within the school. This means that in a Republic atheists and religious minorities are effectively barred from the teaching profession unless they are prepared to pretend that they are catholic.

That’s absurd. There’s no good reason to defend that sort of discrimination.

So Atheist Ireland is urging citizens to contact their elected officials and push for a different bill, one offered up by the Anti-Austerity Alliance, that would extend anti-discrimination protections to all teachers, regardless of faith. 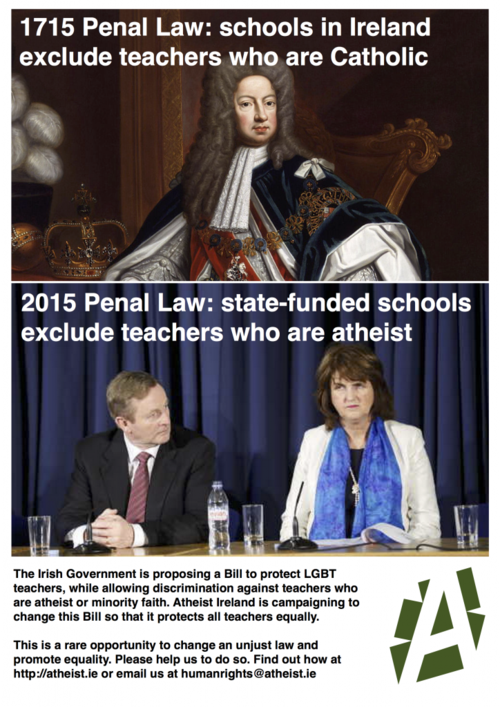 If you’re an Irish citizen who would like to help the group with their efforts, please contact them right here.