The United States Army has infringed on the rights of minority religious groups before, but this time, they risk being smitten by the hammer of Thor.

For the past six years, Heathens (their word) in the Army have been fighting for official recognition of their religion, which modernizes traditional Norse, Germanic, and Anglo-Saxon beliefs in gods like Odin and Freyja and an afterlife in the warrior’s paradise Valhalla. While the Air Force began recognizing Heathens last year, the other branches of the U.S. Military have not followed suit. In January, the Army briefly approved Heathen and Asatru (the Norse word for the religion), but reversed its position a few days later. 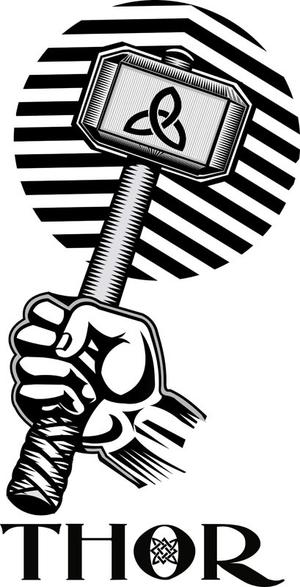 The Army’s refusal to recognize Heathens puts its followers in a frustrating state of limbo:

Should [Sergeant Jeremiah] McIntyre die, the U.S. Department of Veterans Affairs would allow a hammer of Thor on his tombstone.

But the Army does not otherwise currently recognize the active-duty soldier’s faith. He can’t organize or attend Heathen services on base without special permission, he can’t receive prayer or counseling from a Heathen chaplain, and if he were to die in the service he would probably end up with a nondenominational Christian burial.

“It’s all well and good to be allowed to display my religion on my tombstone, but I’d like to be able to display it while I’m still alive,” he said.

It’s troubling that Army chaplains default to nondenominational Christianity when a soldier identifies his or her religion as “Other” or “No Preference,” although it’s not surprising. This fits into what appears to be a broader attitude of “close enough” when it comes to recognizing the Army’s Heathens as a distinct religious group. While their beliefs and practices bear some resemblance to Wicca and Paganism, they’re distinct enough that Heathens don’t see those designations as a reasonable alternative.

“It almost feels demeaning when you have to pick something like ‘Other’ or ‘NoRelPref’ because the Army doesn’t have something within administrative databases for your record,” Sgt. Daniel Head, one of the soldiers pursuing the change, said via email from Germany, where he’s stationed.

“At best, a service member might have ‘Pagan’ or ‘Wiccan’ as an option, but this still is not the same and does not benefit the Soldier the same services.”

At least some non-Heathens in the Army are sensitive to the conflict. The above quote appeared in a surprisingly sympathetic article in the Army Times.

The Army does have some reason to be suspicious of small, obscure religions like Heathen, especially ones that sound like they might come from reading too many comic books. Members of religious groups are permitted to adjust their schedules in order to participate in services, and regular attendance can create much-needed community and emotional support for soldiers who are far away from their homes and families. The Army might be skeptical that Heathen-identified soldiers really are engaging in religious observances, and not just carving out an official time slot for hanging out with their friends.

While some soldiers might use the Army’s policy on official religious meetings as a loophole, the Army’s Heathen activists don’t seem to have any such plans. And even if they did, what right does the Army have to decide which religions are real? It already recognizes dozens of Protestant denominations, and it recently added Humanism as an official designation distinct from atheism or Agnosticism.

The Heathen community’s six-year battle for recognition should be proof in itself that, whatever Army officials think of their beliefs, Heathens take those beliefs seriously.

July 10, 2015 How to Deal with Unwanted Hotel Bibles
Browse Our Archives
What Are Your Thoughts?leave a comment