Christian evangelist Josh Feuerstein (he of the vertical videos on YouTube), who represents Jesus by saying the most despicable things he possibly can and then acting like a martyr whenever anyone calls him out on his bullshit, has done it again.

First, check out the image he used when talking about homosexuality: 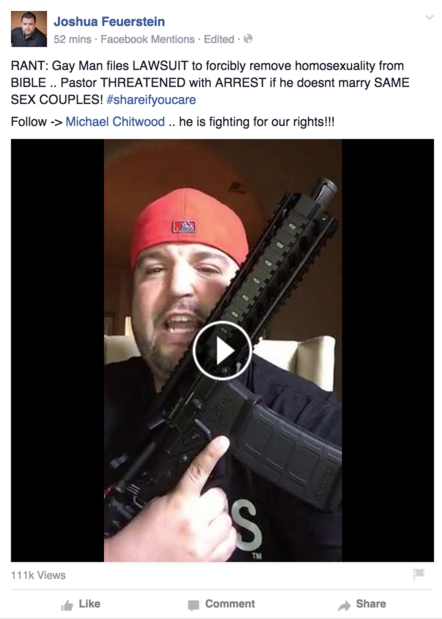 No veiled threat there at all…

Then you see what he wrote.

There’s no link for what he’s talking about, but that’s just plain stupid. How would that even work? What power would a local judge have over an entire religion’s Holy Book? Why are random words CAPITALIZED?

Again, no link, and no chance of it actually happening. Pastors don’t have to marry gay couples if they don’t want to. It’s that simple. If there was a threat, it must have been an empty one.

So I watched the video (which I can’t embed here) to see if Feuerstein would explain these stories. And when he did, it was clear his bluster didn’t match his facts.

The gay man’s lawsuit? Turns out that’s a story that’s more than seven years old. Conservative writers have been posting about it this week because, I assume, they haven’t figured out how to read or do research.

More importantly, though, that lawsuit didn’t go anywhere. It wouldn’t have. It made about as much sense as the Christian woman who sued all homosexuals earlier this year. It’s one crazy person that no one ever took seriously.

What about the pastor threatened with arrest for not marrying a same-sex couple? That story’s from 2014. It involves a Christian couple who set up their own for-profit wedding chapel. It wasn’t a church by any means. They were no different from bakers who aren’t allowed to discriminate against customers regardless of their faith. The couple even made it clear at one point that they had no problem marrying people of non-Christian faiths and conducting civil ceremonies. When they were faced with marrying a gay couple, they altered their website to remove all that information. Shady stuff all around.

And city officials said the couple was never threatened with jail.

You know how I know all this?

I found it on Snopes.

Because I did the two seconds of research that Josh Feuerstein is too lazy to do since he’s too busy making sure his hat is in the proper position before breaking out the phone he uses to videotape himself even though his fans gave him tens of thousands of dollars to buy an expensive camera that has yet to make an appearance.

You want to know why people can’t take Christians seriously? It’s because too many of them promote ignorant jerks like Feuerstein, who can’t be bothered to tell the truth and who will repeat any lie to his audience as long as it suits his needs.

Because when you’re unable to engage in a battle of wits due to lack of ammo, you might as well get ready for the war against your imaginary enemy.

(Thanks to Dana for the link)

July 10, 2015
A Former Jehovah's Witness Explains Why He Left the Unethical Faith
Next Post