I posted yesterday about how, in Texas, Gregg County Clerk Connie Wade refused to issue marriage licenses to gay couples because she was waiting for direction from the Attorney General.

But I didn’t believe her because she didn’t hide her personal faith-based opposition to marriage and there was a giant wall of crosses in her office: 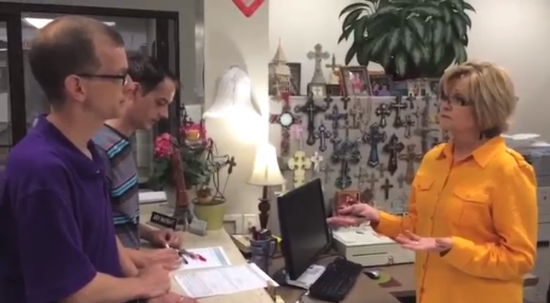 Two important updates to this story.

First, the Wall of Crosses has come down:

“The employee voluntarily took the crosses down,” [County Judge Bill] Stoudt said, noting that he did not order the crosses to be removed.

“If the crosses have been removed, we consider that a victory for state/church separation,” [Freedom From Religion Foundation attorney Rebecca] Markert said. “There’s nothing further to do.”

Second, the Crosses did not belong to Wade, but rather one of her employees. While it’s tempting to let Wade off the hook, it’s appalling that the boss didn’t see the problem before yesterday.

Wade, to her credit, was praised in one local publication for following the law and working quickly to issue those marriage licenses despite being personally opposed to to the Supreme Court’s decision. So good for her on that front.

(Thanks to Lark62 for the link)