Here’s a slippery slope argument for you: Gay marriage is now legal across the country… which means Christians will eventually be forbidden from holding public office.

If that makes sense to you, then you must be Bryan Fischer: 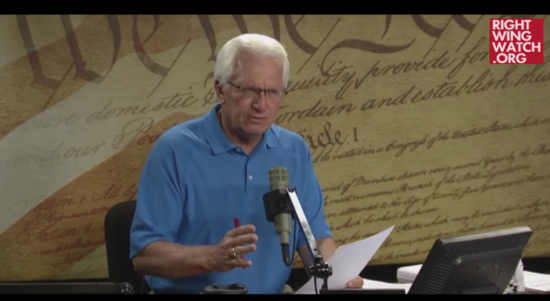 You may think that I am exaggerating, that I am hyperbolizing. I assure you, ladies and gentlemen, that I am not, that this is the direction that we are headed… It is, before long, going to become illegal for Christians to hold public office.

Feel free to connect the dots… because I sure as hell can’t.

It’s worth pointing out that several state constitutions explicitly ban atheists from holding public office even though those laws are unenforceable. Must be because of heterosexual marriage.

July 7, 2015
The Million-Dollar Abortion Crowdfunding Campaign Was a Giant Publicity Stunt
Next Post