Mike Huckabee: The Problem with Gay Marriage is That It’s All About Love July 6, 2015 Hemant Mehta

Mike Huckabee: The Problem with Gay Marriage is That It’s All About Love

You know what the real problem with marriage is these days?

According to GOP Presidential candidate Mike Huckabee, it’s that marriage is all about silly things like “love” and “feeling” and “sentimentality.” (When it should be about… um… signing a contract and throwing in a dowry?) 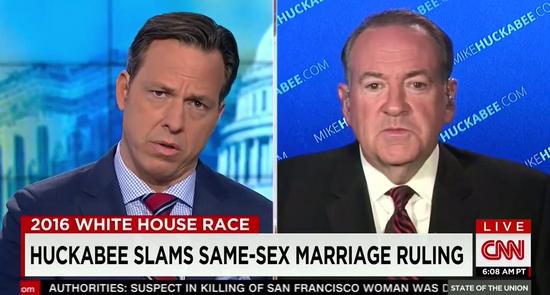 He went on to tell CNN’s Jake Tapper that too many people see marriage as a “selfish means of pleasing self” instead of committing yourself to make your partner happy.

Someone should tell Huckabee that the gay and lesbian couples who can now get married share that vision. They want to commit to their partners for life, but couldn’t officially do so in some states until now.

Every time Huckabee opens his mouth, he gives voters another reason to keep him out of the White House.

(via Think Progress. Thanks to Scott for the link)

July 6, 2015
TheraminTrees Explains His Journey Out of Faith in This Beautiful Video
Next Post

July 6, 2015 Conservatives Are Mad Because President Obama Didn't Say "God" in His Fourth of July Address
Browse Our Archives
What Are Your Thoughts?leave a comment