Bowling Green, Kentucky is a small town known for a few things. It’s where Western Kentucky University is located. It’s the former home of filmmaker John Carpenter. It has a pretty cool Corvette museum. It also, as recent developments have demonstrated, is host to a news organization that has completely abandoned the concept of journalistic integrity.

The Bowling Green Daily News published the following announcement on its website yesterday: 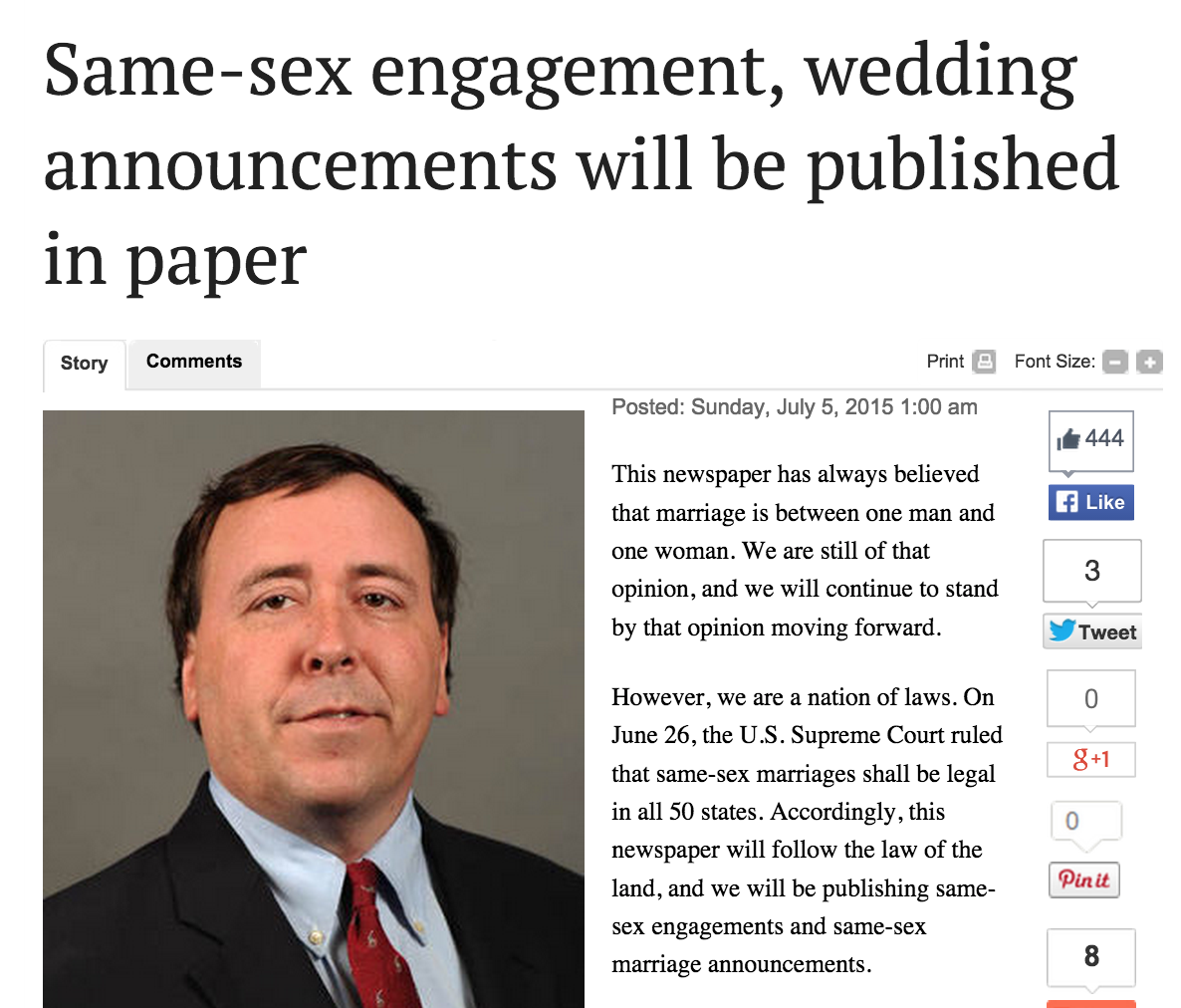 This newspaper has always believed that marriage is between one man and one woman. We are still of that opinion, and we will continue to stand by that opinion moving forward.

However, we are a nation of laws. On June 26, the U.S. Supreme Court ruled that same-sex marriages shall be legal in all 50 states. Accordingly, this newspaper will follow the law of the land, and we will be publishing same-sex engagements and same-sex marriage announcements.

We know that this will be disappointing to some of our readers. We empathize with their thoughts on this controversial matter and hope through time they will support our decision and understand that we must follow the law of the land.

I’m not really sure how a newspaper has an opinion on marriage (when did a publication become sentient?), but this entire statement is unadulterated nonsense.

The marriage equality decision in Obergefell has absolutely no bearing on what a newspaper must or must not do. Editor Steve Gaines could have easily cast this as a pragmatic shift given the ruling — accommodating additional news stories within the community and potentially creating additional relevance for the paper. That might have been sound reasoning for them. Instead, he announced the policy shift by framing it as a complaint about the expanding definition of marriage. What same-sex couple is going to want their happiest moments anywhere near Bowling Green Daily News coverage at this point?

As Chris Joffrion, one member of the Bowling Green LGBTQ community, put it to me:

But this goes beyond bigotry and stupidity; it’s an abdication of journalistic integrity. The preamble to the Society of Professional Journalists’ Code of Ethics reads:

[P]ublic enlightenment is the forerunner of justice and the foundation of democracy. The duty of the journalist is to further those ends by seeking truth and providing a fair and comprehensive account of events and issues. Conscientious journalists from all media and specialties strive to serve the public with thoroughness and honesty. Professional integrity is the cornerstone of a journalist’s credibility.

In framing the newspaper’s policy with religious doctrine, the Bowling Green Daily News expressed frank disinterest in anything resembling a “fair” accounting of events. They made it quite obvious that they have no need for “enlightenment.” It’s like they wanted to make it very clear that they couldn’t care less about journalistic integrity. It’s tragically ironic, given that one of the nation’s best journalism programs sits uphill from their offices.

That’s really only part of the story, though. Unsurprisingly, the paper started to catch some heat from people who (rightly) felt the announcement was out of line. Writing letters to the editor, after all, is a time-honored tradition — especially with traditional newspapers. Usually, these responses are either published or duly noted; direct replies aren’t exactly common. But as though feeling the need to confirm the fact that they have absolutely no professional integrity ’round those parts, Gaines actually answered one such letter.

His reply, posted on the recipient’s Facebook page, read:

Thank you for your very unfounded and unprofessional criticism. I stand by what we printed and would assure you that your rhetoric does not represent the majority of the opinions of our readers and the majority opinion of Kentuckians. I will not be embarrassed for simply having a different view from you and will not even dignify your claim of us being bigots with a reply. Have a good day. Steve

What an embarrassment. You know, it really is a tragedy that newspapers are dying out. When run well, they provide tremendous value to society. But in this case? Well, maybe the Bowling Green Daily News dying out wouldn’t be such a bad thing.

July 6, 2015
Denmark's New Minister of Science is a Creationist
Next Post