The last time we posted about Jehovah’s Witnesses Governing Body member Tony Morris, he was complaining about the evils of higher education. But in the latest video for the JW online television network, Morris gets even worse.

During a discussion about child abuse and how Church members who go through that should always report it — so far, so good — Morris said the JW Church has long condemned abusive behavior.

To prove it, he brings up an issue of Awake! magazine from 1982 because, even then, the Church called for protecting children. He even reads from an article about “chickens” and “hawks” to support his argument (2:49 mark): 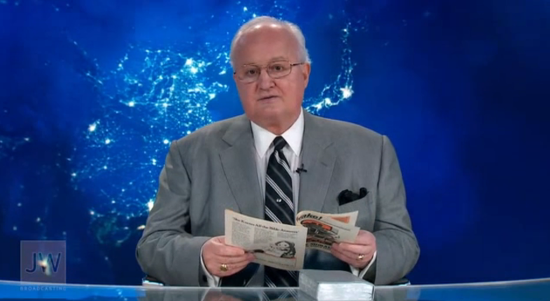 [The article] warned about homosexual men who prey on and advocate the right to use boys for sex. Shame on them!

There you go. The problem isn’t about religious leaders who use their authority and trust to abuse children. It’s gay guys who are members of NAMBLA. Which Morris seems to think is all of them.

The 1982 “‘Chickens’ and ‘Hawks’” article to which Morris alludes is a shameless piece of propaganda blaming homosexuals in general for child prostitution rings that flourished in the 80s and 90s, and which society itself has condemned (such as in the 1994 award-winning documentary “Chicken Hawk: Men Who Love Boys“). (See Wikipedia article)

Morris’ exploitation of this isolated controversy to make a sweeping generalization about gay people represents only the latest example of what appears to be a pattern of homophobic bigotry above and beyond even the scathing condemnation of gays and lesbians found in Watchtower publications.

Meanwhile, one of the most recent high-profile cases of abuse within the JW Church involves a male leader and a young woman.

A report by the Center for Investigative Reporting also uncovered internal Church documents which explained to JW leaders how to handle reports of child abuse:

Internal documents obtained by Reveal show that the Witnesses have systematically instructed elders and other leaders to keep child sexual abuse confidential, while collecting detailed information on congregants who prey on children.

Watchtower instructions to elders in the 2010 Shepherd the Flock of God book and subsequent instructional letters uphold the “two witness rule,” whereby if there is no witness to an allegation of child molestation (or no allegation from a second victim is forthcoming) elders are to “leave matters in Jehovah’s hands,” as the following scan clearly shows 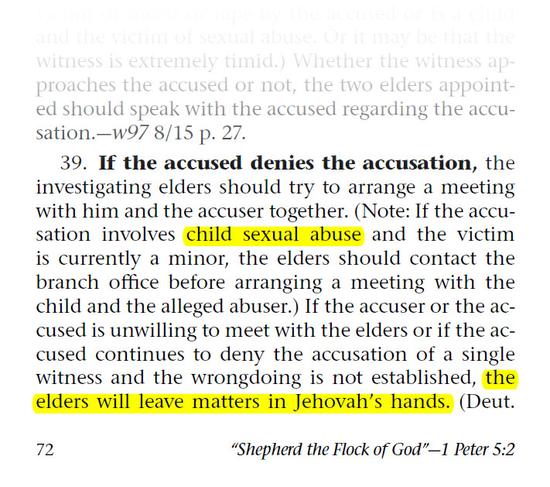 These are not the signs of a Church that takes abuse seriously. The problem isn’t gay guys who prey on children. It’s a system that lets abusers get away all too easily with their crimes by letting God deal with it in the afterlife.