What does President Obama have to do to convince people he’s a Christian? You’d think his rendition of “Amazing Grace” at a black church the other week might have swayed the doubters a bit… but that’s giving them too much credit.

During his Weekly Address, Obama wished everyone a happy and safe Fourth of July, expressed support for the U.S. Women’s National Team before their World Cup championship game, and spoke about the sacrifices of the men and women in the military… but he didn’t mention “God” anywhere in the address so conservatives are flipping out. 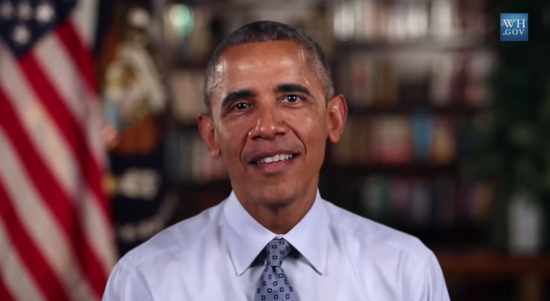 … doesn’t he want God to bless our nation?

I’m beginning to think he does things like this just to tick people off.

Yeah… that’s why. It’s all part of a master plan to eradicate Christianity.

Jim Hoft at Gateway Pundit is even harsher:

As Obama’s term as President is slowly nearing its end, more and more of who the man is, and what he truly stands for, is beginning to seep out.

Because if he doesn’t say “God” in every other sentence, he’s the anti-Christ.

Dave Urbanski of The Blaze called attention to the omission before evading all responsibility with this line:

You be the judge.

Judge of what?! Whether he’s a Christian? (And who thinks Glenn Beck‘s fan club is capable of reasonable judgment?)

@TIMENOUT is he anti christ?

[ Military ] Open Question : Obama removes God from 4th of July address. What is wrong with him? This proves he is muslim. what do you…

@pearly2004 @DebWilliams57 the Godless little man #obama. Is anyone surprised?

Maybe Obama didn’t feel a need to say “God” because he already mentioned “Creator” earlier in his address:

We remember as well that this is the day when, 239 years ago, our founding patriots declared our independence, proclaiming that all of us are created equal, endowed by our Creator with certain unalienable rights including the rights to life, liberty, and the pursuit of happiness.

Or maybe he didn’t say “God” because he doesn’t have to say it every goddamn time he makes a statement.

Just like he doesn’t need to wear a little American flag pin on his suit jacket for you to know he loves this country.

How petty are these people to whine about something this irrelevant?!

(via Joe Newby. Thanks to Brian for the link)

July 6, 2015
Mike Huckabee: The Problem with Gay Marriage is That It's All About Love
Next Post