We Finally Know the Plot of God’s Not Dead 2

God’s Not Dead featured actor Kevin Sorbo as a college professor who demanded that his students admit God doesn’t exist. (Something that never actually happens in real life.)

The sequel is currently being filmed in Little Rock, Arkansas, and it looks like the producers are following the same playbook as before.

This time, Melissa Joan Hart (best known for playing the title characters in Sabrina the Teenage Witch and Clarissa Explains It All) stars as a high school teacher who quotes the Bible in class and gets sued by a student (Hayley Orrantia of The Goldbergs) who believes in this silly idea called “separation of church and state.”

There’s even a big trial… 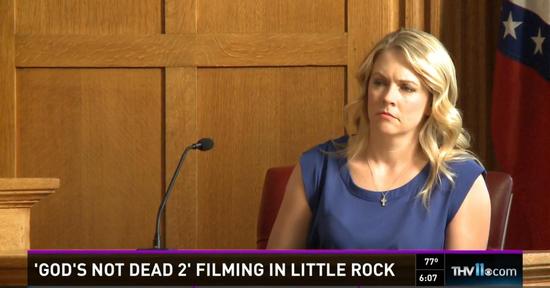 The first movie was heavily criticized, among other reasons, for having a plot that was completely detached from reality. At least this story is a little more plausible — we’ve seen teachers proselytize in public school classrooms.

But since this is a Christian film, let me take a guess at how it plays out…

Hart’s character probably says a Bible verse or two to make some broader point — no big deal since she’s not trying to preach — but the student blows it completely out of proportion, because that’s what Christians think atheists do all the time.

(If that ever actually happened, groups like the Freedom From Religion Foundation would send a letter to school officials reminding them that teachers shouldn’t be promoting faith in the classroom. Assuming the issue was resolved, that would be it. No lawsuit. Certainly no trial.)

Unless there was clear evidence that the teacher was illegally promoting faith in the classroom, even after receiving warnings to stop, nothing would really happen.

But I’m guessing the producers of God’s Not Dead 2 will ignore all of that for the sake of stoking the flames of religious persecution.

I’ve said this before, but I read passages from Ecclesiastes in a high school AP English class because it was poetic, the allusions were worth discussing, and there was a lot to interpret. Even now, I wouldn’t say that crossed the line. There’s a lot of literary value, even in holy texts.

I have a feeling that sort of nuance will be missing from the film entirely.

By the way, in case you’re wondering, Hart has never been a lightning rod for her religious views, though she is a right-winger who supported Mitt Romney in 2012. She may, however, start talking about her own faith once the publicity machine kicks into high gear for this movie, which is slated for release next Easter.

(Thanks to Phillip for the link. Image via KTHV)

July 5, 2015 Why is a Mormon Flag Flying Over a Utah State Park?
Browse Our Archives
What Are Your Thoughts?leave a comment