How Abstinence-Only Sex Education Led Me Down An Unexpected Path July 3, 2015 Hemant Mehta

How Abstinence-Only Sex Education Led Me Down An Unexpected Path 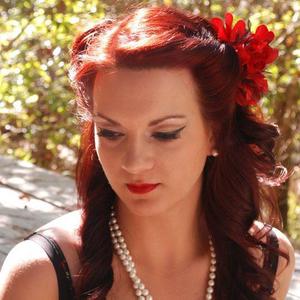 When talking about my religious past, I often find myself referencing movies. How else are mainstream humans going to relate? Neo waking up in The Matrix. The barely-audible Asian chick in Pitch Perfect. And, in this case, Drew Barrymore‘s role in Never Been Kissed. If you’ve never seen the movie, the title really says it all.

Imagine being an almost-24-year-old, intelligent, moderately-attractive-yet-socially-awkward female venturing into the real world for the first time, having never even held hands with a guy and not having much in the way of worldly knowledge, but knowing that degree of innocence is not the norm.

Thanks to the Duggar family, mainstream humans can now finally get a glimpse of the largely hidden fundamentalist cults that pervade our society and the damage they do to women.

Being raised in one of those cults taught me just one thing about sex: There is this hole in my body, but if anything goes near it before I’m married, I will lose all value in this life and basically become a “filthy rag,” according to Isaiah 64:6.

In that culture, everything we’re exposed to and everyone we talk to is controlled by men. At Hyles-Anderson College, one of the motherships of this movement, the books we read and music we listened to had to be approved in advance, our curriculum was written by church leaders, and we needed a chaperone in order to leave campus (even after designating where we were going and for how long). Students caught using the Internet on their phones would have them confiscated. Even dating required a green light from above. Full-length hosiery was to be worn at all times to prevent men from lusting after your “toe-cleavage” (yes, that was a thing), and you’d better not get caught sitting on a bed with another female or you’d receive demerits (or possibly expulsion). 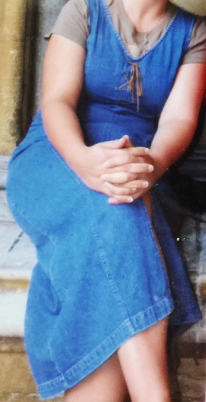 I don’t remember ever receiving any actual sex education, I just remember the constant rantings from home and the pulpit about purity. The one that stood out the most in my mind was a story about a girl who was being picked on for her virginity. She silenced her peers with this one profound line:

(Also on True Love Wait’s list of Top Ten Ways to Say No To Sex.)

We heard plenty of sermons from celebrity-like pastors who told us they had counseled hundreds of couples and the ones who got divorced all had one thing in common: They were un-pure before marriage. And of course it’s the woman’s job not to lead the man into temptation because men are created by God to have the need of “physical companionship,” and cannot be held responsible for acting on it.

How do you avoid that sort of temptation? According to God, “it is better for a man not to touch a woman” (1 Corinthians 7:1). Us fundies take that shit literally! “Bible space apart” is the closest we can get to a member of the opposite sex before falling into sin.

We had designated dating areas, complete with these fantastic divided benches that prevented couples from accidentally brushing up against each other. 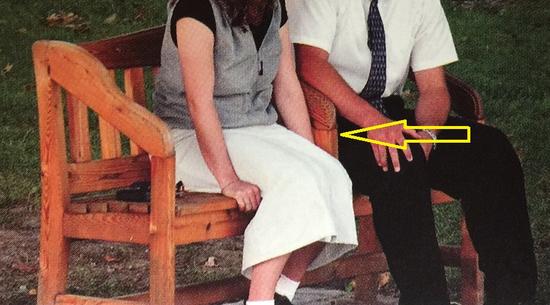 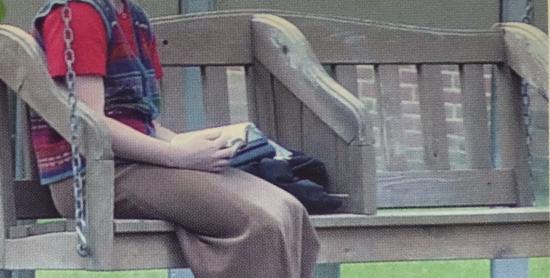 Even thinking about sex is a sin. Matthew 5:28 says “But I say unto you, That whosoever looketh on a woman to lust after her hath committed adultery with her already in his heart.”

I was also told to steer clear of tampons because they “break something that is intended for your husband to break.”

So what’s a girl to do? I was growing weary of all those rules I had devoted so much energy following, so I began what I call my “wild phase.”

In retrospect, it really wasn’t wild at all. I went on vacation with my family, bought a pair of pants, listened to some country music, tasted alcohol, said the word “bullshit” out loud, and got my first kiss (in that order). There was no going back to living like the Baptist equivalent of a nun after that.

I eventually decided to just get the whole virginity thing over with. Since I believed virginity was a huge turn-off and even a deal-breaker for most “normal people,” I chose to keep that little fact to myself and pretended like I knew what I was doing. (I was just supposed to lie there, anyway, right? The guy gets on top, the penis accidentally falls into the vagina, and BAM! Fireworks! How hard could it be?)

Yeah… There were no fireworks.

And I found myself in some incredibly awkward situations. I didn’t even know that I didn’t have a basic understanding of the male anatomy — or my own for that matter. All the time I spent Googling “how to kiss” and sneaking around the public library skimming through dime-store romance novels for the good bits proved no real benefit whatsoever. I didn’t know what a “clitoris” was. The only nudity I had been exposed to was through art. I remember looking at those carved statues of nude men wondering how on earth everything was supposed to work. (I will never forget the exact moment I found out that the penis actually gets bigger! Holy shit!!)

It took me three times of getting (partially) naked with a man before I worked up the courage to look down there. I was afraid that, if I did, I would either faint or start laughing hysterically from nervousness (I do that).

I cried the first few times and thought there was something wrong with me based on the fact that his… er… member… didn’t magically deflate immediately after like I thought it would. It wasn’t until I was pregnant that I found out he had indeed ejaculated.

One of my partners once handed me a condom which I embarrassingly couldn’t figure out what to do with. After fumbling with it for a few minutes, I handed it back to him feeling like a complete fool. That scene never appeared in any of the romance novels I’d read.

With all the hype about the evil power of sex, I honestly wondered what I was missing. People risked their immortal souls for those few moments of pleasure, but I, frankly, was not impressed.

I essentially went from first kiss to pregnant in a matter of months. I can count on both hands the number of sexual encounters I had before my “wild phase” abruptly ended with the mortifying feeling that my life was over. I didn’t tell most of my friends and family for fear of their judgement. I didn’t even tell my own mother.

Abortion was out of the question. That was murder and children raised in single-parent homes were doomed to Hell with no escape! (Or so I was always told.) So I did the only thing I was taught I could do in that situation: I got married.

I stayed in an abusive relationship for several years because I didn’t know I had any other choice. I truly believed I was doing what was best for my kids (yep, plural). He later admitted to taking advantage of my sexual naiveté — for example, he convinced me that when he got an erection, if I didn’t “take care of it,” it would never go away and become a health hazard. I didn’t know any better.

Was it stupid for me to believe those things? Absolutely! But I was told my entire life that a woman’s purpose was to be a help-meet for her husband which included never saying no to sex. There are hundreds, if not thousands, of institutions in our country today that teach women this, setting the stage for so many patterns of abuse.

I take responsibility for my decisions, and I wouldn’t be the person I am today were it not for my children, but I’m not going to pretend that my choices at the time were all my own, because they weren’t. They were the product of a lifetime of religious indoctrination and lack of education. I spent several years in that abusive relationship because I didn’t have the knowledge to recognize it for what it was. I also never told anyone because that just wasn’t something you were supposed to talk about.

When I finally admitted to my mother that I was getting divorced, she reminded me that even if a man is abusing his wife, she should submit and pray about it, not leave the marriage.

I’m in my thirties now and until this past year, I have lived out the whole of my sexual life thinking I was broken. I didn’t know how to really enjoy sex and I didn’t think I was physically capable of reaching orgasm with another person. (I convinced myself at one point that all these women talking about orgasms had to be lying because it just wasn’t happening for me.)

Finally learning to let go of that guilt and recognizing the slut-shaming stereotypes has helped me embrace my own sexuality. I was so excited the first time I climaxed during partner sex that I immediately called my best friend to brag about it! That may sound silly, but it was a big moment for me, in more ways than one!

My experiences may be a bit extreme, but the overall story is remarkably similar across the spectrum to other women in these cultures. Abstinence-only sex education — a paradox to say the least — is built on a foundation of ignorance. Not only does it not work, but it causes more unwanted pregnancies than it prevents. It churns out adults who don’t understand their own bodies, and it leads people into abusive relationships because they don’t know what a healthy one looks like. The shame and guilt we’re made to feel from abstinence education is internalized — and it doesn’t just magically go away with a marriage license.

That’s why I’m raising my children in a sex-positive environment. Or at least I hope I can, given that I’m not necessarily sure what that is. I still struggle with discerning between what I really think and feel and what are just the lingering remnants of my past ideology. It’s definitely a work in progress, but I’m getting there.

I believe situations like mine are much more common than most people realize, but we don’t hear about them because our society still isn’t comfortable talking about this subject. The only way to really bring attention to this issue is for people to become vocal about their experiences and to recognize the harm that is caused by promoting ignorance as a form of education.

July 3, 2015
Kindergartners Will Soon Be Told to Experiment with Same-Sex Relationships, Says Christian Bigot
Next Post