What’s Going On with the Huge Percentage of Atheists in China? July 2, 2015 Hemant Mehta

What’s Going On with the Huge Percentage of Atheists in China?

Back in April, WIN Gallup International (no relation to Gallup, Inc.) released a survey ranking global religiosity — which countries were most and least religious.

Overall, we learned that 63% of people around the world were religious, while those who described themselves as “a convinced atheist” made up 11% of the global population. (Global, in this case, referred to the 65 countries from which they were able to acquire data.) Unlike most surveys that put atheists under a broader “non-religious” umbrella, this one actually separated us from the rest of the “Nones.”

The most faith-filled countries in the world, with more than 90% of the population describing themselves as religious, were Thailand, Armenia, and Bangladesh: 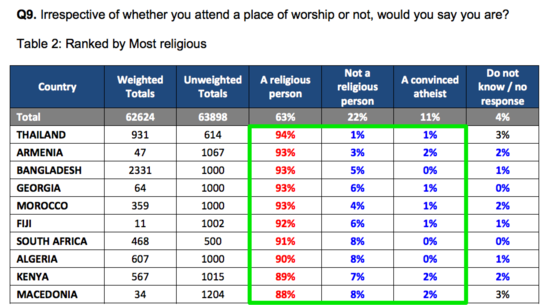 On the other end, the least religious countries were China, Japan, and Sweden:

China has a ridiculously high percentage of atheists. At the time the data came out, I wrote that the country shouldn’t be celebrated because it’s known for its human rights abuses and has (actually) persecuted Christians. We also know of its Communist history and how that, too, may play a role here.

Ian Johnson of the New York Times took a closer look at those unusually high numbers to see if there was a better explanation than “China is home to a lot of atheists.”

WIN/Gallup asked respondents in every country to characterize themselves as “a religious person,” “not a religious person” or “a convinced atheist,” with a fourth option of “do not know/no response.” In China, the first two options used the term “xinyang zongjiao,” literally “a person who believes in religion.”

“Xinyang zongjiao is a very formal term,” [Yang Fenggang, who runs the Center on Religion and Chinese Society at Purdue University] said. “People may not respond the way the researchers intend.”

Another problem with the poll could be methodology, [Boston University anthropology professor] Dr. [Robert] Weller said. In China, it was conducted online — a medium that increasingly is not anonymous here. “The ‘convinced atheist’ rate is probably so high because everyone knows it’s the official answer,” Dr. Weller said.

In short, don’t take the numbers at face value. It’s hard to compare countries in this fashion when, in some cases, citizens may interpret your questions in very different ways or may feel pressured to give a less-than-honest response. When you reduce such important questions to a set of numbers, you often don’t get the full story.