There are some Christians who use the “love the sinner, hate the sin” line — which is bad enough — and then there are Christians like Jeff Amyx.

He’s the owner of Amyx Hardware & Roofing Supplies in east Tennessee and this is the sign he put up on his door: 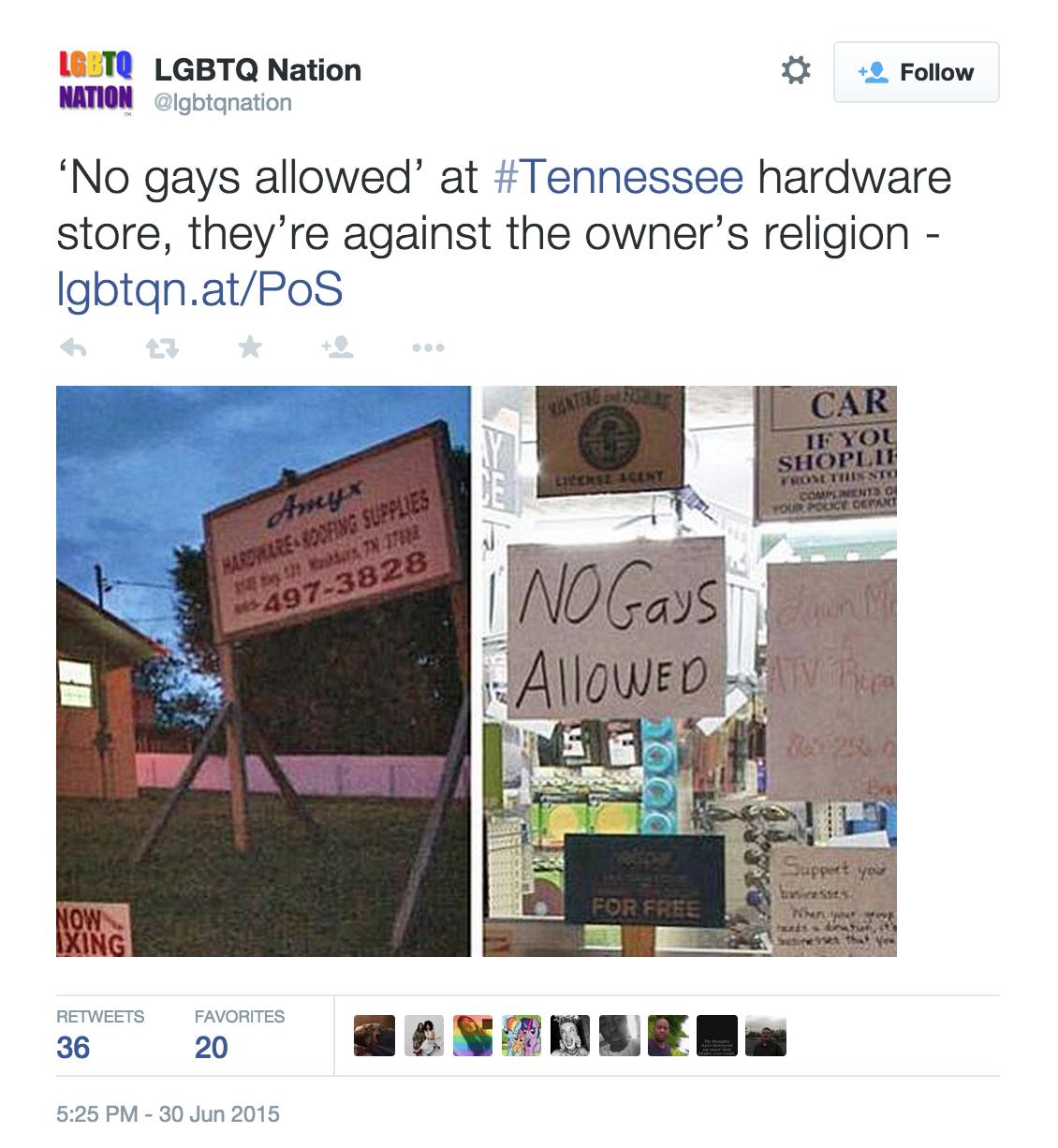 Not “We oppose the Supreme Court’s decision,” but no gay people allowed into his store at all.

(As if all gay people wear giant signs explaining their orientation so he can tell who to kick out.)

“They gladly stand for what they believe in, why can’t I? They believe their way is right, I believe it’s wrong. But yet I’m going to take more persecution than them because I’m standing for what I believe in,” Amyx said.

He said he has no plans to take the sign down.

Unlike bakers and florists who hide their bigotry under the cloak of “conscience” and who say they’ll serve gay customers but don’t want to “participate” in their weddings, this is just naked hatred.

Amyx, a Baptist minister, wants no interaction with gay people in his store, like they’re going to turn him homosexual if they get within two feet of him.

But you know what? I’m glad he put the sign out there. It won’t just keep out gay people. It’ll keep out any decent human being who finds Amyx’s behavior reprehensible. Even if you’re Christian, you should be in that group.

You know who *is* allowed in Amyx’s store?

Women who have had abortions.

Basically, everyone else who breaks some “major” Christian sin. Amyx doesn’t care about any of that, because he has no sign up about them. He thinks homosexuality is a special sin.

July 1, 2015 Mormon Church, in Press Release Condemning Gay Marriage, Features Couple Supportive of LGBT Rights
"Dumbass... what he circled was "4-5" which is, as anyone who went through Grade School ..."
TS Bomboragh, Wahine Queen Pastor: The College Football Championship Score ..."
"On the other hand, growing up in the 1950s, I learned that the USA was ..."
kelemi Christian Textbooks Are Already Rewriting the ..."
"Considering the Daughters Of The Confederacy have had a stranglehold on textbooks in the south, ..."
NotAgain A Contumelious Gal Christian Textbooks Are Already Rewriting the ..."
"When they teach superstition as fact which makes people act often violenty, then they dont ..."
Zasz Christian Textbooks Are Already Rewriting the ..."
Browse Our Archives
What Are Your Thoughts?leave a comment