The Supreme Court’s decision to legalize same-sex marriage was a huge win for people who believe in justice and dignity — otherwise known as the “mentally ill,” or more specifically, the “metally ill,” according to North Dakota State Rep. Dwight Kiefert. 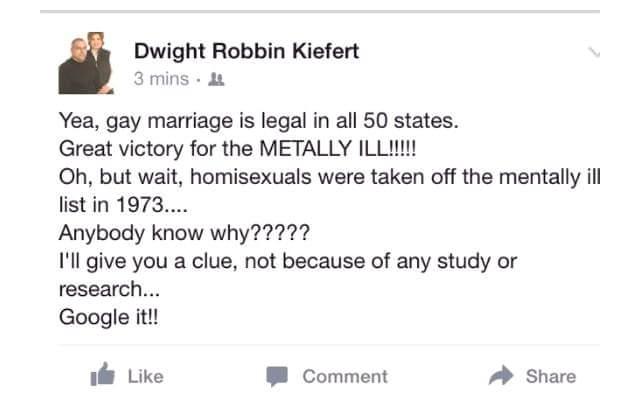 Kiefert expressed his utter disgust at the Supreme Court ruling in an incoherent, offensive, and factually flawed Facebook post on Friday.

Yea, gay marriage is legal in all 50 states. Great victory for the METALLY [sic] ILL!!!!! Oh, but wait, homisexuals [sic] were taken off the mentally ill list in 1973….Anybody know why????? I’ll give you a clue, not because of any study or research… Google it!!!

(In unrelated news, I vote that we all refer to our gay friends and family as our homey-sexuals. Google it!!! Because someone else had that idea before me.)

Kiefert joined a majority of North Dakota state legislators in voting to ban same-sex marriage back in 2004, saying it was “not normal” because “you can’t reproduce.” But fellow North Dakotans are quickly distancing themselves from his comments:

“Dwight speaks for himself. He has a lot of strong opinions,” Carlson said.

Carlson said he “absolutely” doesn’t believe homosexuality is a mental illness, adding, “That topic shouldn’t even be discussed.”

“He has a lot of strong opinions” is the sort of thing you say about a third-grader who won’t stop yelling in the middle of class, not an elected official who’s supposed to be a mature adult. Despite Kiefert’s strong opinions, virtually all major medical organizations have weighed in to affirm that homosexuality is not a mental illness and hasn’t been considered one for decades. And for individuals, gay and straight alike, who do face mental illnesses, Kiefert’s condescending, mocking tone and suggestion that a “victory for the mentally ill” would be a bad thing is particularly horrific.

Gregory Herek, a psychology professor at the University of California at Davis who has studied heterosexual attitudes toward gays and lesbians for more than 30 years, said the concept of homosexuality as mental illness has been completely debunked.

“The major mental health professional associations have not considered homosexuality a mental illness since 1973,” Herek said, “and they also acknowledge that it was a mistake to have considered it a mental illness in the first place and that classification reflected cultural stereotypes and biases that were prevalent at the time.”

Herek said sound research showed “no support” for the idea of homosexuality as a mental illness.

Kiefert later said he didn’t really care if what he wrote was true or not, as long as he got the point across that he’s a great big homophobe:

“There’s a lot of question marks,” he said.”Was what I read true? I don’t know.

“The bottom line is: Through my faith, I have to oppose it,” Kiefert, who is Christian, said of homosexuality.

He added that his viewpoints have earned him threats in the past.

“I just hope people respect me for who I am,” he said.

“I just hope people respect me for who I am” is a real thing said by someone who made the blanket statement that all gays are sick.

How he thinks anyone is going to take him seriously –or metally — is beyond me.

(Thanks to Waylon for the link)